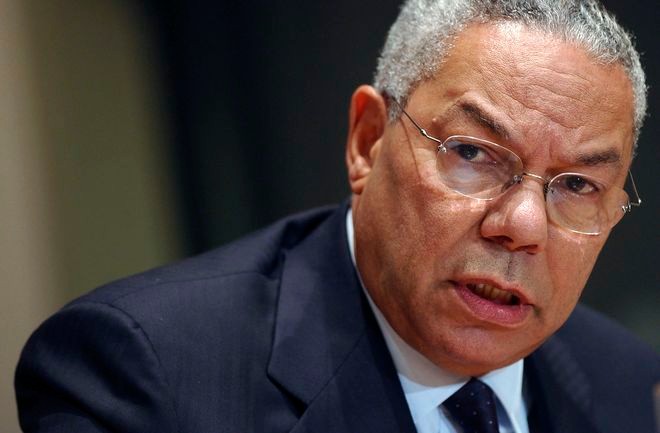 I remember a scene where Secretary of State Colin Powell, in the presence of President George W. Bush, is vilified by a fellow Cabinet secretary as a "chicken" and a "wimp."

Hearing of Powell's demise on Oct. 18, I reread his memoir and critical biography.

For preaching against a reckless invasion of Iraq, Powell was slighted by Vice President Dick Cheney and Defense Secretary Donald Rumsfeld, who were raring to go to war, and became isolated within the administration.

In his desperate bid to deter Bush from going ahead, Powell famously reminded him of an American retail policy known as the Pottery Barn rule: "You break it, you buy it."

This implied that once U.S. troops were deployed in Iraq, the United States would be responsible for seeing Iraq through postwar settlement and reconstruction.

But the anti-invasion camp within the White House lost its battle after top CIA officials told Bush there was a "slam-dunk case" that Saddam Hussein had weapons of mass destruction.

Still striving to at least obtain the support of the international community, Powell spoke at the United Nations: "We know from sources that a missile brigade outside Baghdad was disbursing rocket launchers and warheads containing biological warfare agents to various locations. ... Most of the launchers and warheads have been hidden in large groves of palm trees. ..."

Ultimately, the world learned that the weapons of mass destruction did not exist.

The crucial CIA intel proved baseless, and the United States ended up dragging many nations into an unjustified war.

Powell later recalled that his prewar speech to the United Nations was a “blot” on his record.

In his younger years, Powell did two tours in Vietnam and faced the reality of a war that turned into a quagmire.

Throughout his life, he never wavered in his conviction that armed forces must not be deployed recklessly and he opposed the use of nuclear weapons as "extremely inhumane."

And that stands as a testament to this great, a so-called "chicken" and "wimp," who had graced the U.S. political community.