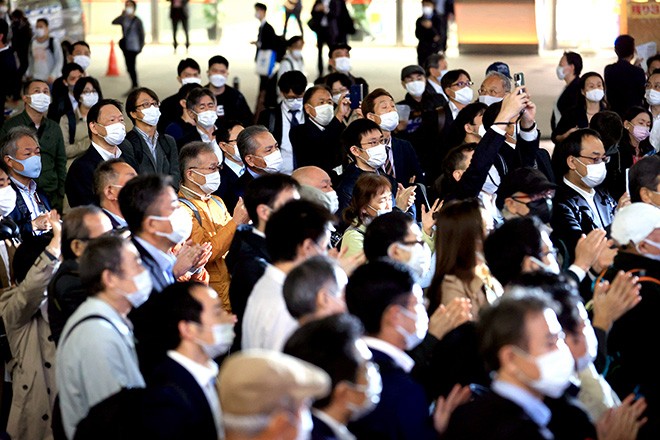 Tokyo voters listen to a speech by a candidate running in the Lower House election on Oct. 19. (Kazuhiro Nagashima)

Opposition parties have literally gotten their act together and are growing increasingly confident about ousting the Liberal Democratic Party from power in the Oct. 31 Lower House election.

The opposition parties are cooperating in the election by backing a single candidate in 217 of the 289 single-seat districts.

Although the opposition bloc still needs to convince voters that a change in government is needed, the parties are in a much better position now than in their fragmented state before the last Lower House election was held four years ago.

The 2017 election was contested after the then Democratic Party split up into smaller groupings. The result was that a number of opposition party candidates ran in many of the single-seat districts, which dispersed the votes and helped the LDP and junior coalition partner Komeito gain a landslide victory.

The ruling coalition won more than two-thirds of the seats contested.

In that election, only 57 districts were effectively one-on-one contests between a candidate backed by the ruling coalition and one fielded by the opposition.

This time around, one-on-one battles will be held for about 140 districts. The results in those districts could determine which side takes control of government.

In 63 districts won by ruling coalition candidates in the 2017 election, the opposition parties’ candidates actually gained more votes in total.

And in 52 of those 63 districts, the opposition bloc is now fielding a single candidate.

A symbol of opposition cooperation is the Tokyo No. 8 district, which the LDP has monopolized since the single-seat district electoral system was introduced in 1996.

Yukio Edano, the head of the main opposition Constitutional Democratic Party of Japan, gave a speech on behalf of the opposition candidate.

Edano said that backing a single candidate is “not the goal, but only the means” to achieve the greater goal of taking over control of government.

He said various opposition parties had to make difficult decisions to achieve such cooperation, but they deemed it necessary to cut into the number of seats held by the LDP.

A member of the Japanese Communist Party who dropped plans to run in the district turned up at Edano’s speech and helped to pass out fliers for the opposition candidate.

Edano has also sought to establish a clear difference with the ruling coalition to give voters a real choice. He has called for cutting the consumption tax rate, working toward greater gender equality and dealing with the economic disparity produced under the Abenomics package of economic measures implemented by past LDP governments.

At the same time, the CDP is gambling with its cooperation with the JCP.

Many conservative voters could be put off by the closer ties.

The “alliance” with the JCP has also raised concerns within Rengo (Japanese Trade Union Confederation), the nation’s largest labor organization and the main backer of the CDP.

Even when the unpopular Yoshihide Suga was prime minister, the opposition side looked like a lost cause. The CDP’s support ratings were stuck at dismally low levels compared with those for the LDP.

But the fairly quick agreement on cooperation has raised hopes among the opposition.

A high-ranking CDP official also pointed to the comparatively low approval rating for the Cabinet of Prime Minister Fumio Kishida.

An Asahi Shimbun survey showed an approval rating of 45 percent for Kishida’s administration, the lowest since 2001 for the first survey of a Cabinet.

“The voters know what is going on,” the CDP executive said. “There is a possibility we can win if we continue with our persistent efforts.”