Mount Aso in Kumamoto Prefecture erupts in the morning of Oct. 20. (Video provided by a reader) 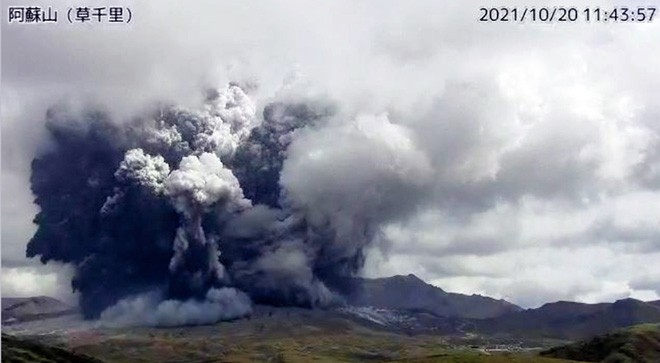 Mount Aso sends up a massive plume of volcanic smoke after erupting in Kumamoto Prefecture at 11:43 a.m. on Oct. 20. (From the Japan Meteorological Agency website)

Mount Aso in Kumamoto Prefecture erupted shortly before noon on Oct. 20, sending a massive plume of dark volcanic smoke up to 3,500 meters high.

The first crater of Mount Nakadake erupted around 11:43 a.m., according to the Fukuoka District Meteorological Observatory.

The central government set up a liaison office at the crisis management center of the prime minister’s office in Tokyo at 11:44 a.m. on Oct. 20.

In the afternoon on the same day, Chief Cabinet Secretary Hirokazu Matsuno spoke to reporters at the prime minister’s office.

“No injuries have been reported yet,” he said. “But I have heard that there were a few climbers on the mountain, and we are now checking on the details of that information.”

According to the Fire and Disaster Management Agency, a party of four climbers was descending the mountain and no one was injured.

The public is advised to be on the alert for huge volcanic rocks and pyroclastic flows within areas of about 2 kilometers from the crater.

The volcanic tremor amplitude at Mount Aso was detected gradually increasing from around 3:30 p.m. on Oct. 13.

The meteorological observatory on the same day raised the volcanic alert level to the public from Level 1, which is potential for increased activity, to Level 2.

Mount Aso last erupted in a massive upheaval on Oct. 8, 2016, for the first time in 36 years. A weather satellite observed volcanic smoke rising from the crater up to 11,000 meters high.

The Japan Meteorological Agency at that time raised the volcanic alert level from Level 2 to Level 3, and prohibited people from entering within an area of about 2 kilometers from the crater.