Dice-K throws last strike, bids farewell to game that is ‘my life’ 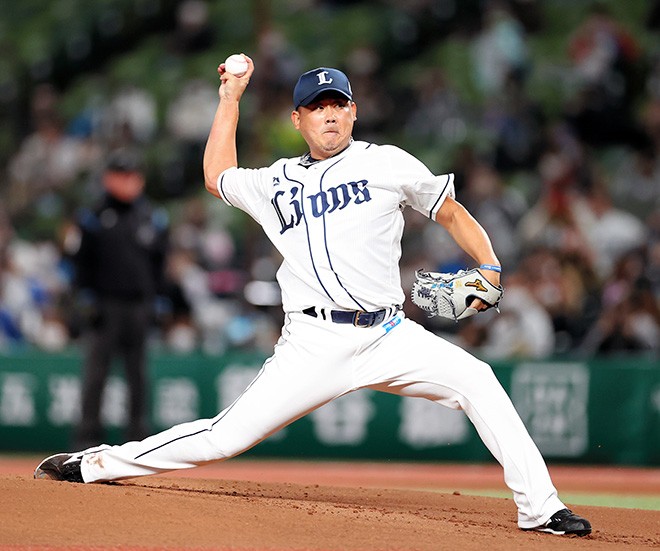 Daisuke Matsuzaka pitches in his final game on Oct. 19 at the MetLife Dome in Saitama Prefecture. (Shiro Nishihata)

Daisuke Matsuzaka’s pitch sailed out of the strike zone, giving the batter a free trip to first base.

But the crowd in Saitama Prefecture and players and coaches from both teams gave the pitcher a standing ovation.

It was the final pitch in the long and decorated career of the retiring 41-year-old.

“In ordinary circumstances, I would not be qualified to take the mound,” Matsuzaka said at a post-game news conference on Oct. 19. “Or, I should say, I was not in a condition to do so.”

Matsuzaka has struggled with neck pain and numbness in his right hand. He underwent a cervical spinal surgery in July 2020 but has never fully recovered.

In July this year, he announced he would retire after this season.

Matsuzaka took the mound on Oct. 19 for the first time since he signed with the Saitama Seibu Lions in 2020.

He made his professional debut in 1999 with the same team at the age of 18, and spent eight seasons as a Lion until he joined the Boston Red Sox in the major leagues.

Matsuzaka’s jersey number was 16, but the Lions changed it to 18, the one he wore in his glory days, when he was named the starting pitcher for the home game against the Hokkaido Nippon-Ham Fighters.

“I stepped on the mound with a feeling of gratitude to the people who have supported me,” Matsuzaka said. “I also wanted to take this opportunity to set matters right for myself.”

He threw five pitches to Kensuke Kondo, the only batter he faced.

The second pitch was a strike clocked at 118 kph, much slower than the 155-kph heat that he threw as the “Monster of the Heisei Era.”

“I worried, to be honest, if I could throw a strike,” Matsuzaka said. “That one single strike… it was a gift from the baseball gods at the last possible second, I think.”

A younger Matsuzaka had no problems throwing strikes. Screaming fans at Fenway Park in Boston used to hoist boards with “K” for every batter fanned by “Dice-K,” as he was called there.

At a pre-game news conference specifically set up for his retirement, Matsuzaka said, “I feel like I have looked forward to this day, and yet I feel like I didn’t want this day to come.”

Fans in the stands may have felt the same way.

The first and only strike he threw ended the silence.

Although the Fighters won the game 6-2, the Lions tossed Matsuzaka into the air five times in celebration after the final at-bat.

He walked all the way around the stadium, waving at fans in the stands and bowing deeply.

He then strolled up to the pitcher’s mound for one last time, brushed off dirt from the pitcher’s plate and placed his right hand on it.

Then he burst into tears.

“I thought, ‘This is it,’” Matsuzaka said about what went through his mind at that moment. “And I was overwhelmed with gratitude. Thank you for allowing me to pitch not only at this stadium but also many others.”

During the pre-game news conference, he noted: “I have played for more than 35 years. (Baseball) is pretty much my life.”

Matsuzaka was around 5 years old when he started playing baseball.

He caught the attention of baseball fans across Japan and major league scouts when he led the Yokohama Senior High School team to the spring and summer titles in the national high school baseball tournaments in 1998.

He was the No. 1 draft pick for the Lions.

During the off-season of 2006, he moved on to Boston Red Sox.

The following year, he became the first Japanese pitcher to win a World Series game, contributing to Boston’s championship.

He has notched 170 wins in his 23-year professional career.

But he said he battled injuries in more than half of those years.

“There aren’t many players like me. I have equal amounts of the best memories and rock-bottom experiences,” he said. “I received more criticism (than praise) in the second half of my career. I want to give myself credit for not knowing how to give up.

“If you don’t give up, you will be rewarded at the end,” he added.

After 35 years of ups and downs, he said he still loves the game.

“I am happy that I could end my career with my love for baseball remaining unchanged.”