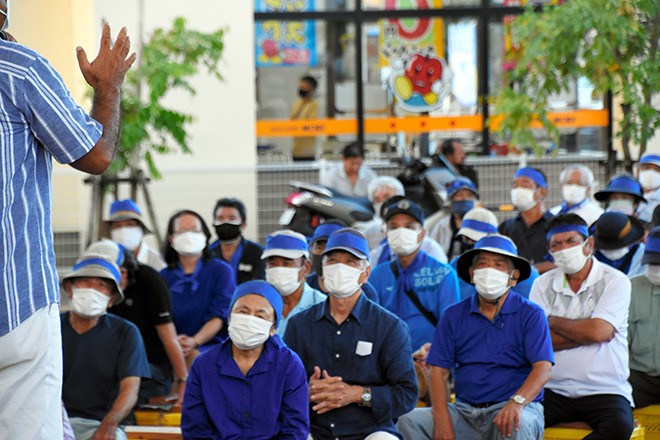 Supporters listen to a candidate in Uruma, Okinawa Prefecture, on Oct. 9. (Maho Fukui)

OKINAWA, Okinawa Prefecture—Candidates in the Lower House election here were split on how far they should highlight an issue that has long dominated politics in Okinawa Prefecture: construction of a U.S. military base.

Although protests continue over the presence of U.S. bases in the prefecture, economic recovery from the novel coronavirus that spread throughout the prefecture is on the minds of many voters.

All four single-seat constituencies in the southern prefecture are being contested between a candidate fielded by the ruling coalition and at least one opposition party candidate also endorsed by supporters of the “All Okinawa” anti-U.S. base movement.

A fierce battle is playing out in the Okinawa No. 3 electoral district between the same two candidates in the 2019 Lower House by-election.

Tomohiro Yara, who won that vote as an independent backed by the All Okinawa group, is trying to fend off the challenge of Aiko Shimajiri, a Liberal Democratic Party candidate and former minister in charge of Okinawa and Northern Territories affairs under the Shinzo Abe administration.

Yara, in his campaign speech in Okinawa city on Oct. 19, blasted the central government for snubbing islanders’ repeated pleas to halt construction of the new U.S. base off the Henoko district of Nago to take over the functions of the Futenma air station in Ginowan, also in the prefecture.

“The Abe and (Yoshihide) Suga administrations ignored the voices of Okinawans” who are against the new base project, he said. “Okinawa has been constrained.”

Yara, a former reporter with a local daily newspaper, is running in the election with the backing of the main opposition Constitutional Democratic Party of Japan.

His speech also stressed measures to fight the novel coronavirus pandemic and steps to lift the local economy.

But his camp acknowledged that the most crucial issue is the construction of the U.S. base.

“Although the will of the people has been scorned in past elections, we need to persist in appealing our position,” said a senior official with Yara’s campaign.

All these politicians are supported by the All Okinawa group.

But some officials on Yara’s side voiced concerns that focusing too heavily on the U.S. base issue could backfire because the novel coronavirus has hit the prefecture hard and caused serious damage to the local economy.

Okinawa Prefecture relies on tourism as a key source of revenue.

In fiscal 2019, 9.47 million tourists descended on the island prefecture, but the number plunged to 2.58 million the following year due to the public health crisis.

Okinawa Prefecture had one of the worst ratios of serious infections per population in the country.

Shimajiri also started her campaigning in Okinawa, the city that co-hosts the U.S. Kadena Air Base.

She questioned Tamaki’s ability to lift Okinawa from economic gloom, saying he lacked a clear vision to bolster Okinawa’s economy after the current 10-year economic development project for the prefecture ends in March.

“We cannot see a roadmap after that,” she said.

Shimajiri pledged to tackle poverty among children and strengthen measures to improve education and welfare.

After her loss in the 2019 by-election, which was essentially a one-issue poll, Shimajiri’s supporters believed that her strategy of taking a clear stand on supporting base construction drew a backlash from voters.

This time, she decided to remain mum over the contentious base issue.

“Even some conservatives in the prefecture feel reluctant to openly acknowledge their acceptance of the base project,” one official said. “Considering how unaffiliated voters will react, you do not need to rock the boat.”

Another official said the Henoko relocation project is a done deal, citing progress in the landfill work to construct the base.