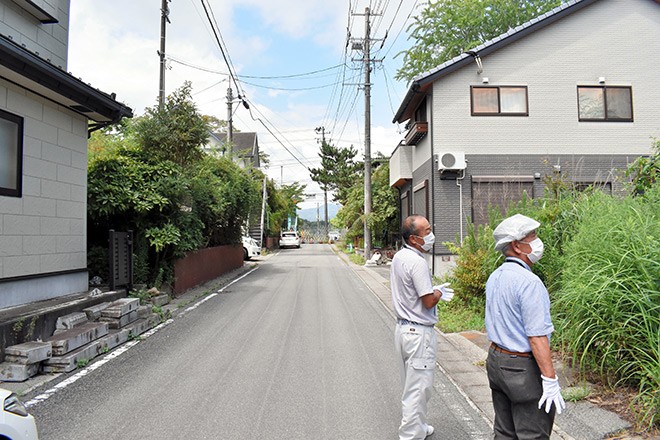 Shoichi Sasaki’s house on the right, shown here on July 30 in Okuma, Fukushima Prefecture, will remain “off-limits” even after an evacuation order is lifted next spring for two houses on the other side of a road. (Shinichi Sekine)

OKUMA, Fukushima Prefecture—Evacuees eager to finally return to their homes near the hobbled Fukushima No. 1 nuclear plant have been thrown into confusion over the way evacuation orders will be lifted.

The orders will end in parts of the “difficult-to-return zones” in less than six months but not all of them as the town of Okuma had hoped.

In a compromise with the central government, the town accepted a boundary that cuts across the Machi neighborhood of Okuma, creating a livable “enclave” surrounded on all sides by “no-entry” areas.

Residents from the enclave will be able to return to their homes, but their neighbors, even on the other side of a street, could be prohibited from returning until the end of the decade.

Okuma co-hosts the nuclear plant, which suffered a triple meltdown after being hammered by the tsunami triggered by the Great East Japan Earthquake in 2011.

Machi is located along National Route 6 around 3 kilometers southeast of JR Ono Station, which stands in what used to be Okuma’s downtown.

The road is busy with trucks for post-disaster rebuilding work and passenger cars. But streets behind the barricades along the road are still lined with empty houses.

The around 90 households in the community were all forced to flee after the disaster. Machi was later designated a difficult-to-return zone, the most severe level for evacuation orders.

In 2017, about 20 of the 140 or so hectares of the community’s landmass were collectively designated by the central government as a “specified reconstruction and revitalization base,” entitling the area to preferential decontamination work.

The evacuation order covering those 20 hectares is expected to be lifted next spring.

However, Shoichi Sasaki, head of the Machi community, is not excited by the prospect.

“Our community has been divided, although radiation levels are more or less the same on the inside and outside of the ‘reconstruction base’ area,” Sasaki, 72, said.

Most of the 860 or so hectares in Okuma that have been designated as reconstruction bases are concentrated around Ono Station. The Machi community is detached from those areas.

A behind-the-scenes struggle between Okuma and the central government led to the curious demarcation, according to former senior town officials and assembly members.

Okuma town representatives called for a lifting of all difficult-to-return zone designations, but the central government did not like the idea, which would have required huge cleanup costs.

The “specified reconstruction and revitalization base” zoning system was a “product of compromise” to promote decontamination work for the lifting of evacuation orders only in limited parts of the difficult-to-return zones.

Sources said the central government made the proposal to designate part of the Machi community as a reconstruction base even though it was isolated from other bases around Ono Station.

Central government officials said the proposal took account of the fact that Machi was the seat of the Kumamachi village office before the village merged into Okuma during the Showa Era (1926-1989). Machi was home to a certain concentration of residences.

Okuma town representatives, concerned about a division of the Machi community, called on Tokyo to clean up and lift evacuation orders across all areas of the town, a former senior town official said.

The pleas were in vain.

Okuma ended up accepting Tokyo’s proposal, hoping it would “at least broaden areas where evacuation orders have been lifted,” the former senior town official said.

In Sasaki’s survey in May of all households from the Machi community, 11 said they wanted to return to their homes.

One of those who want to go home is Sasaki. However, his house lies just outside of the reconstruction base zone across a road.

“I have no idea when I will be allowed to go back home,” Sasaki said. “I hope as many residents as possible will be able to return and help each other to rebuild their lives there.”

The central government in August released a plan for cleaning up and lifting evacuation orders in areas outside the reconstruction bases, including those in Machi. Residents who had to evacuate from those areas may be allowed to return home by the end of the 2020s.

The specific dates and areas will be determined after talks with local communities, officials said.

Around 33,700 hectares of difficult-to-return zones exist in seven municipalities in Fukushima Prefecture.

Tokyo plans to lift evacuation orders for 1,510 hectares in Okuma, Futaba and Katsurao from next spring, followed by 1,237 hectares in three surrounding municipalities in spring 2023.

Cleanup of radioactive contaminants and development of infrastructure, including water supply and sewerage, are under way in those areas.

However, high residual radiation levels following the cleanup and delays in the restoration work have emerged.

Radiation levels failed to dip below 3.8 microsieverts per hour, the safety standard for lifting evacuation orders, at 1,269, or 2.7 percent, of measurement sites in areas of Okuma where the Environment Ministry conducted cleanup work between June 2013 and May this year.

The starting date has been put off to “by the end of this year.”

Radiation levels also failed to fall below the safety standard at 563, or 1.0 percent, of the measurement sites in the neighboring town of Futaba, the other co-host of the nuclear plant.

Evacuation orders in Futaba were initially scheduled to be lifted next spring. But delays in the infrastructure development will likely push back that schedule to around June at the earliest.

“It is essential to prepare an environment that allows residents to live without anxiety,” said Kencho Kawatsu, a guest professor of environmental policy and radiation science with Fukushima University.

Kawatsu heads an Okuma town committee reviewing the effects of cleanup work and other matters.

The Environment Ministry is conducting supplementary decontamination work in Okuma and Futaba. Kawatsu said the effects of those efforts should be reviewed carefully.

(This article was written by Shinichi Sekine, Toru Furusho and Nobuyuki Takiguchi.)