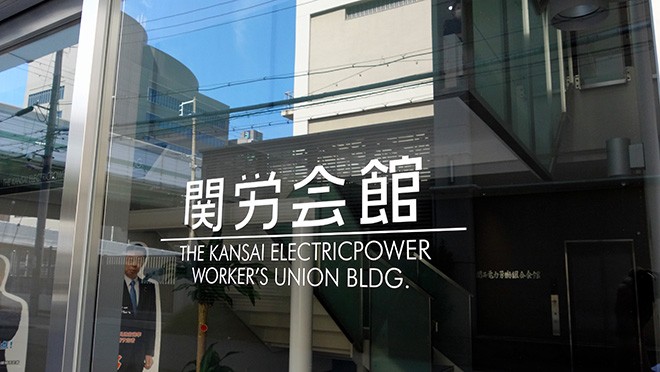 The building in Osaka city housing the headquarters of the labor union for Kansai Electric Power Co. (Hideki Muroya)

Labor unions are moving away from their normal political allies in the current Lower House election over policy disagreements about how the nation should proceed with nuclear power generation.

Traditionally, the electric power companies have supported candidates from the ruling coalition while the unions affiliated with such companies backed opposition party candidates.

But with the opposition Constitutional Democratic Party of Japan including a plank in its campaign platform calling for a move away from nuclear energy, now even the unions are shifting their support to candidates of the ruling Liberal Democratic Party.

The Fukui No. 2 district is a prime example of how this is playing out.

The district is a one-on-one contest between the LDP’s Tsuyoshi Takagi and the CDP’s Takeshi Saiki.

It is home to four nuclear power plants, all operated by Kansai Electric Power Co., including a reactor in Mihama that was given the green light this summer to resume operations even though it has already been online for more than 40 years.

Takagi expressed his displeasure at the government’s proposed basic energy plan at a forum on nuclear energy held in Mihama in early October, criticizing it for not saying anything about replacing old reactors or building new ones.

Replacement is a major concern because seven of the 15 reactors in the Fukui No. 2 district are scheduled for decommissioning.

Among those applauding Takagi’s comment were municipal assembly members who won their seats because they earned the backing of labor unions affiliated with Rengo (Japan Trade Union Confederation)--a major supporter of the CDP.

One assembly member said it is impossible to back a party that rejects nuclear power, whereas discussions have been held with Takagi about how to replace or build new reactors.

And while the Fukui chapter of Rengo decided to endorse Saiki, one component of Rengo, the prefectural federation of labor unions affiliated with electric power companies, will not.

In other districts in the Kinki region, LDP lawmakers have reached out to Kansai Electric’s labor union for their support and have garnered endorsements, even if some have not been out in the open or widely publicized.

One lawmaker running in a district where a CDP candidate is also competing said the support was likely a sign that the LDP’s nuclear energy policy is coming across as more realistic.

Another LDP lawmaker sought and gained the support of the local chapter of Kansai Electric’s labor union. This is the first time the two LDP lawmakers have received support from the union.

The same union also ranked opposition party candidates by party and listed them in order of the level of support that should be shown to the candidate. The union will not endorse the lowest-ranked candidates.

(This article was written by Kenji Oda, Tsunetaka Sato and Hideki Muroya.)