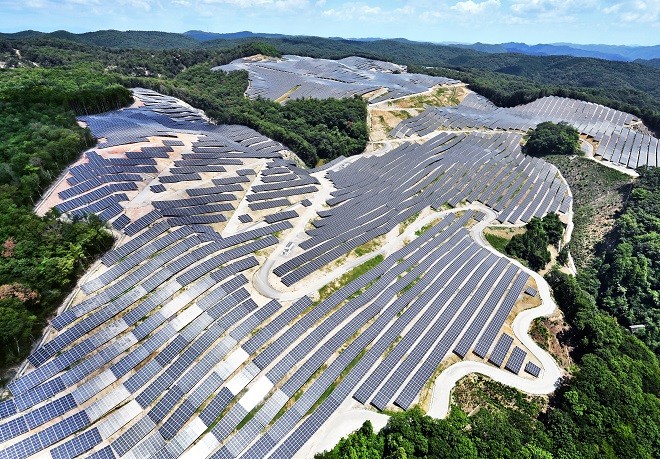 The solar farm shown in this aerial photo is the former site of a golf course in Kamigori, Hyogo Prefecture. (Toyokazu Kosugi)

Driving up a mountainous road in Kamigori, Hyogo Prefecture, the scent of forests wafted into the vehicle through an open window.

A golf course designed by Japanese golfing great Isao Aoki appeared on the car’s GPS map, which was using data that is now somewhat dated. What emerged behind the brick-like gate was not a green fairway, but a winding sea of glittering solar panels.

Though they have fallen out of fashion in recent years, rural golf links may soon be back in vogue in Japan. But not because of a comeback in the sport’s popularity. Power generation companies across the country are finding that old courses like this one are ideal locations for new solar installations.

The former golf course has been converted into the Ako Mega Solar Power Plant, which boasts some 260,000 solar panels that take up at least 76 hectares.

The establishment generates an estimated 125 gigawatt hours, enough to meet the annual needs of 29,000 households. The energy will be sold to Kansai Electric Power Co. over 20 years via the government’s feed-in tariff system for clean energy. It is expected to cut 50,000 tons of greenhouse gases a year.

The now-shuttered golf facility had opened in 1990 during Japan’s asset-inflated economic boom. It was shut down for good in 2017 over financial difficulties.

According to private survey firm Tokyo Shoko Research Ltd., the operator was struggling with sluggish revenues and a dwindling customer base.

For Tokyo-based electricity supplier Pacifico Energy KK, which produces a total of 1.4 gigawatts of electricity from solar power nationwide, the grounds were an ideal spot for a new solar farm.

To install mega solar farms on mountains, trees need to be chopped down and the ground must be leveled. Flood-control reservoirs must also be prepared to prevent torrential rain from causing landslides.

All that requires huge investment, but golf links check almost all the boxes for the perfect development conditions. Without having to do large-scale renovation work, operators can turn a profit even if the power generated is traded at relatively low prices.

One challenge they present, though, involves the wavy ground. Solar power generation can be affected by their level of insolation, and the undulating landscape can hamper the proper positioning of solar cells, reducing their efficiency.

“Flat areas are ideal,” said an official of Asahi Dengyo Co., an Okayama-based company responsible for inspecting and maintaining the Ako Mega Solar Power Plant. “The unevenness of the surface can lead to differences in output from solar panels in the morning, afternoon and evening. Whether the actual performance is at the same level as the designed value should be monitored far more carefully.”

But they have a big advantage in another problem area. Despite the growing desire for greener energy production, solar developments are not always welcomed by the locals.

Electricity producers sometimes struggle to win the consent of area residents for new developments near where they live. Locals can file lawsuits to block solar farms from being built and raise criticisms about them for destroying the environment and natural scenery.

Pacifico Energy organized around 10 town hall style briefings for neighborhood associations to explain its solar project and update them on the construction progress.

Turning already developed golf courses into mega solar power stations is seen as an easier way for contractors to build a local consensus around these large-scale projects.

“There had been the risk that the golf course would be left to decay,” said a 66-year-old man living nearby who welcomed the Pacifico Energy project. “It will be better for the land to be taken advantage of.”

Several decades ago, the number of golf courses rose rapidly across Japan, in part due to the 1987 enforcement of the resort law. But they began to increasingly draw criticism over the risk they could harm the environment through deforestation and use of agrochemicals.

Currently, golf courses are on the decline. Data from a national association of golf course operators shows there were 2,460 facilities in 2002 during the industry’s peak period. That figure dropped to 2,227 in 2019. On average, 13 courses disappear every year.

The initial expense of building a golf course is already hefty, not to mention course maintenance costs and other fixed expenses. On top of that, the sluggish economy and fewer people playing golf have dealt a blow to golf course operators.

If old golf courses are not repurposed after they close, some worry the result could be a lasting “negative legacy.”

In August this year, the economy ministry released an estimate that said solar power generation will be the cheapest option compared to thermal or nuclear power in 2030 though the estimate did not consider expenses related to fluctuations in power output.

As more and more golf sites are appropriated for solar farms, interest in using former golf greens for green power generation is expected to only grow further.

Pacifico Energy is operating and building a total of 15 mega solar farms, including one in Kamigori, throughout Japan.

Kosuge promised that the company “will spread the use of solar power while lessening the burden on the environment.”