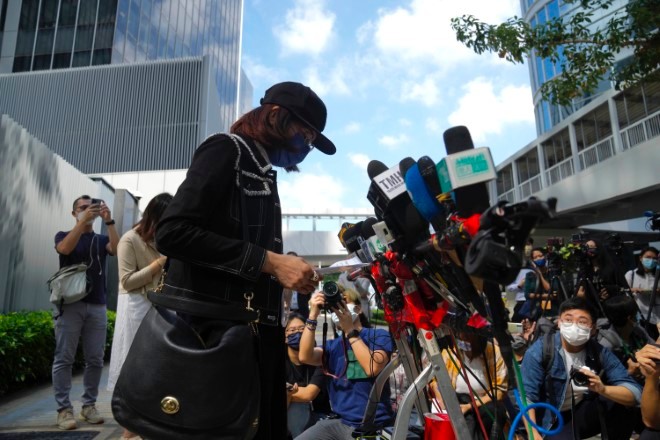 Mrs. Poon, the mother of a young woman killed in Taiwan, speaks to the media outside the government headquarters in Hong Kong, Oct. 20. (AP Photo)

HONG KONG--The Hong Kong mother whose daughter was killed in Taiwan in 2018 on Wednesday lambasted authorities in the Chinese city for letting the man who confessed to the crime walk free, while Hong Kong blamed self-ruled Taiwan for “political manipulation” in the case.

Chan Tong-kai was suspected in the death of Poon Hiu-wing--his girlfriend at the time--while on vacation in Taiwan before returning to Hong Kong.

As Hong Kong lacks an extradition agreement with Taiwan, Chan could not be sent to stand trial and was instead prosecuted and sentenced on money-laundering offences, serving a 29-month prison sentence in Hong Kong. He confessed to killing Poon and expressed remorse, and said he was ready to face justice in Taiwan.

But the case could not proceed because of lack of cooperation between Hong Kong, the semi-autonomous Chinese city, and Taiwan. China claims Taiwan as part of its territory.

Taiwan has yet to issue Chan a visa to enter the self-ruled island, according to Peter Koon, a priest who has been helping Chan.

Taiwan has insisted on meeting Hong Kong authorities to exchange evidence and sort out travel arrangements for Chan, but Hong Kong rejected such a proposal citing a lack of mechanism for mutual legal assistance.

Hong Kong Secretary for Security Chris Tang said Wednesday that he was “sympathetic” to Poon’s mother, and he was aware of Chan’s intention to travel to Taiwan to surrender.

“The fact of the matter is that Taiwan is not willing to allow him to travel to Taiwan based on political reasons,” he said. “The murder happened in Taiwan. All evidence was found in Taiwan. Only Taiwan can let him go to Taiwan and settle the whole matter.”

Poon’s mother has bemoaned the political clash between Hong Kong and Taiwan over the case.

“This is very unfortunate. I’m just a mother. I’m not a political person. I don’t understand why my daughter’s case gets involved in politics,” she said.

The case led Hong Kong authorities to propose an extradition bill in 2019, which would allow Hong Kong to extradite suspects to places with which it does not have extradition agreements including Taiwan and mainland China.

But the proposal sparked mass protests and political strife in 2019, as residents were concerned that the bill would allow suspects to stand trial in China’s opaque legal system. The proposed extradition bill was eventually withdrawn, and the ruling Communist Party in China clamped down on the protests and silenced the opposition in Hong Kong.

Chan was released in October 2019 after his sentence was reduced for good behavior and spent nearly two years living at a police “safe house,” where he was offered protection. He has since left the safe house and is living in a remote area, according to the local newspaper South China Morning Post.

“My daughter… she will never be able to know if justice is done for her killer,” said Mrs. Poon, the mother of the victim who is known only by her last name.

“This can never be solved and goes on forever, and it’s really difficult for us. We brought up our daughter for 20 years, but this government just doesn’t do anything and doesn’t care about us,” she said.