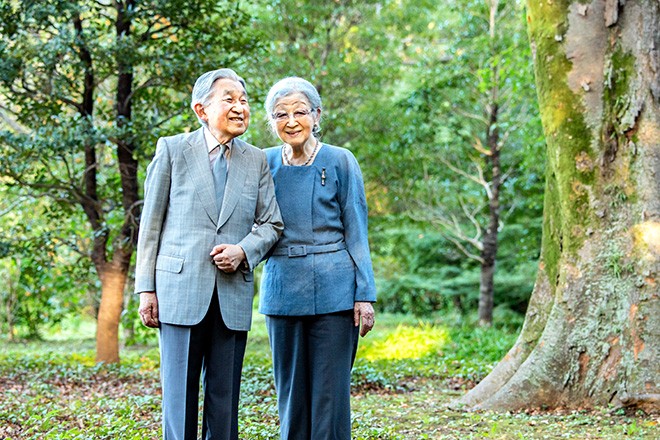 Empress Emerita Michiko enjoys a daily stroll with Emperor Emeritus Akihito in the garden of their residence in Tokyo’s Minato Ward on Oct. 4. (Provided by the Imperial Household Agency)

Empress Emerita Michiko celebrated her 87th birthday on Oct. 20 with sadness at the impending departure of Princess Mako, who will leave the imperial family after her marriage on Oct. 26, according to her close aide.

The aide said Michiko would miss Mako, the first grandchild of Emperor Emeritus Akihito and Michiko, as she loves her dearly.

As she did last year, Michiko lives a quiet life with Akihito due to the COVID-19 pandemic, according to her aide. No events will be held to mark her 87th birthday.

The imperial couple have been living at a temporary residence in Tokyo’s Minato Ward since March 2020. Michiko goes for a stroll in the garden with Akihito in the morning and late afternoon and reads books after breakfast.

This year, the couple frequently talked about the Tokyo Olympics and Paralympics during their daily walks, according to her aide.

The aide said the couple were glad to see the Olympics and Paralympics treated equally at this summer’s Games as they have promoted sports for people with disabilities since the 1964 Tokyo Olympics.

Michiko’s health remains unchanged from last year. She still runs a slight fever in the afternoon every day and her brain natriuretic peptide (BNP) levels, a marker for potential heart failure, remain high.

She cannot freely move her fingers apparently due to hormone therapy she received after surgery for breast cancer. She has yet to have full control over her fingers, but has recently gradually regained the ability to play the piano, according to her aide.

The couple are due to move to their former residence on the grounds of the Akasaka Estate as early as next spring.

Work is under way to incorporate a barrier-free design into the residence, where the couple lived during the period from when they were crown prince and crown princess to 1993 when they moved into the Imperial Palace.