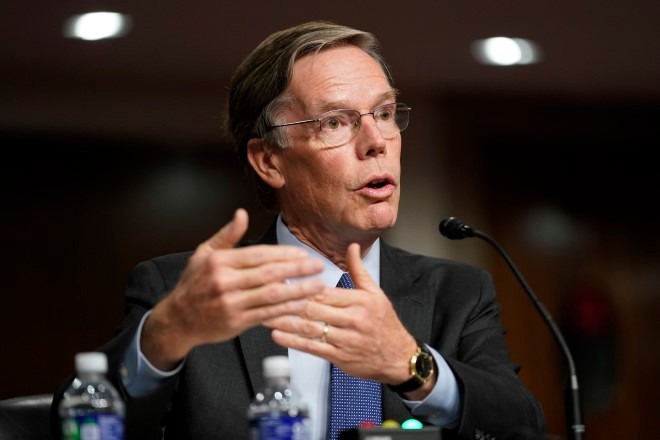 U.S. Ambassador to China nominee Nicholas Burns speaks during a hearing to examine his nomination before the Senate Foreign Relations Committee on Capitol Hill in Washington, Oct. 20. (AP Photo)

WASHINGTON--President Joe Biden’s pick for ambassador to Beijing told lawmakers considering his nomination on Wednesday that Americans should “have confidence in our strength” when dealing with the rise of China, a nation he said the U.S. and its allies could manage.

Nicholas Burns, a former senior State Department official and diplomat with decades of experience in Washington and overseas, testified before the Senate Foreign Relations Committee at a time when the Biden administration is trying to swing U.S. focus overseas to managing competition with China. The post of China ambassador stands to be one of the most important for U.S. foreign policy.

China’s assertiveness militarily, diplomatically and economically in the region and beyond under its ambitious president, Xi Jinping, increasingly has given rise to warnings of a new Cold War. This includes hawkish talk of an arms race with warnings of China threatening to overtake the U.S. in high tech, trade, military technology and other arenas while challenging the U.S. for world influence.

In his testimony Wednesday, Burns had a calmer take, framing the U.S. relationship with China as manageable.

China “is not an Olympian power,” Burns said. While a country of “extraordinary strength,” it also has “substantial” weaknesses and challenges politically, economically and demographically.

“We will succeed if we build this American strength around our diplomacy,” he said.

He emphasized building alliances in the Indo-Pacific as essential to countering China. That included praising the defense alliance Biden announced last month with Australia and the United Kingdom as potentially “transformational.” Domestically, the defense pact is best known for triggering French pique, when Australia broke off a deal for French-made submarines in favor of subs with U.S. nuclear power.

Burns also gave what would be a rare bit of credit from the Biden administration to its predecessor, praising President Donald Trump and his last secretary of state, Mike Pompeo, for reinvigorating a bloc with Australia, India and Japan.

He echoed the Biden administration’s stand on cooperating with China where possible but condemning many of its actions, calling China’s treatment of its largely Muslim Uyghur minority “genocide” and its trade practices unacceptable. He aligned with U.S. support for Taiwan and Hong Kong in the face of China’s military and political actions there.

As the No. 3 State Department official in the George W. Bush administration, Burns led negotiations to control Iran’s nuclear program and to close a nuclear deal with India, which some have criticized as weakening longstanding policy on nuclear nonproliferation. His work since leaving the foreign service includes teaching diplomacy at Harvard’s John F. Kennedy School of Government.

Burns’ status as a senior statesman under Republican and Democratic administrations is likely to win his nomination broad support in a Senate vote. However, two Republican senators, Ted Cruz of Texas and Josh Hawley of Missouri, are pledging to block Biden’s nominees over unrelated disputes, creating what the Biden administration says is a critical shortfall in U.S. diplomatic representation abroad.