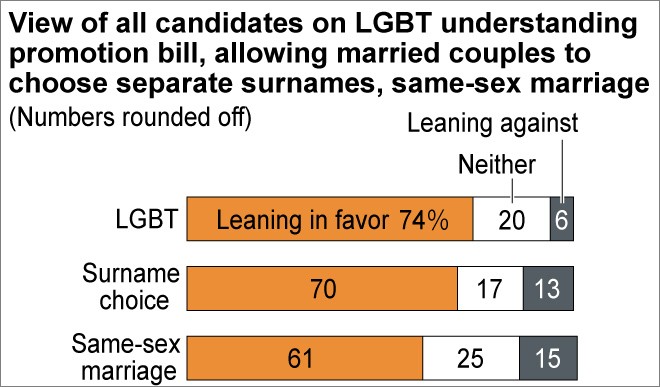 Support for measures to help sexual minorities and allow dual surnames in marriages has increased among ruling Liberal Democratic Party candidates, but the largest group remains undecided on the issues, a survey showed.

In contrast, opposition candidates and those fielded by the LDP’s junior coalition partner, Komeito, in the Oct. 31 Lower House election were overwhelmingly in favor of legislation to promote the changes, according to the survey.

The survey was jointly conducted by The Asahi Shimbun and a team led by Masaki Taniguchi, a professor of political science at the University of Tokyo.

Local governments and citizens groups have pressed the central government to promote the rights of LGBT individuals, including officially recognizing same-sex marriages.

The LDP would not go that far but set up an internal committee to look into possible legislation on “promoting an understanding of sexual minorities.”

However, no consensus in the party was achieved, and the bill was never formally submitted to this year’s ordinary Diet session.

According to the survey, 43 percent of LDP candidates were leaning in favor of such legislation, greatly exceeding the 11 percent who were against it.

However, the largest segment—46 percent—said they were undecided.

Komeito and the opposition Japanese Communist Party have included planks in their Lower House election platforms calling for passage of such legislation.

Ninety-six percent of the candidates for those two parties were in favor of the legislation and none was against it.

The survey also asked candidates their views on whether to allow married couples to register under separate surnames as well as the same-sex marriage issue.

More LDP candidates were against such measures than those in favor, but opposition has shrunk from the survey four years ago.

Forty-four percent of the LDP candidates were undecided.

Regarding the legalization of same-sex marriages, 38 percent of LDP candidates were opposed, while 12 percent were in favor. Again, the largest group consisted of undecided candidates, at 50 percent.

Among all candidates, 70 percent were in favor of allowing married couples to choose separate surnames, with only 13 percent leaning against the proposal. Seventeen percent were undecided.