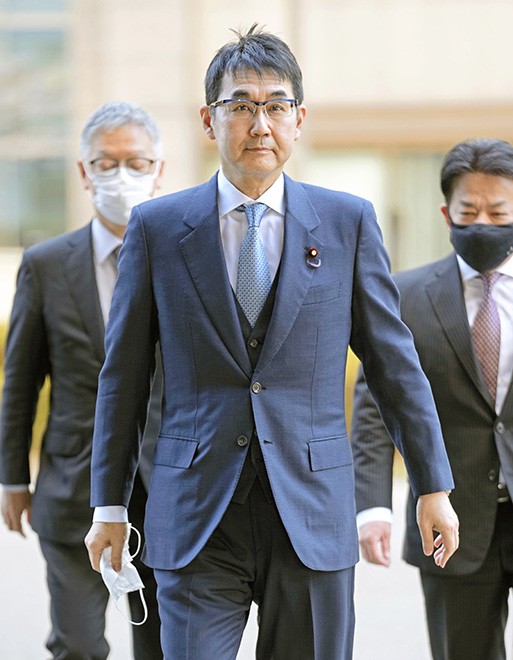 Former Justice Minister Katsuyuki Kawai dropped his appeal on Oct. 21 of a Tokyo District Court ruling that sentenced him to three years in prison for vote-buying in the 2019 Upper House election.

“I have decided to serve the prison sentence as soon as I can,” Kawai said through his lawyer. “I am the only one to blame for (the vote-buying scandal) and am determined to take full responsibility for it.”

Kawai, 58, was indicted on charges of violating the Public Offices Election Law along with his wife, Anri, 48, by handing out about 28.71 million yen in total to 100 people in a Hiroshima constituency to help her win her race.

In handing down the guilty verdict in June, the court characterized his case as “vote-buying on such a large scale.”

But Kawai appealed the sentence, saying that it was unfair that he was not given a suspended sentence.

He had initially insisted on his innocence in the trial. But he did an about-face in March and admitted to the charges.

He later resigned as a Lower House lawmaker, who previously belonged to the ruling Liberal Democratic Party.

Kawai was appointed as justice minister by then Prime Minister Shinzo Abe in September 2019, but he stepped down after about a month because of the scandal.

Anri lost her Upper House seat after her sentence of a year and four months in prison, suspended for five years by the same court, was finalized.

Prosecutors did not indict the people who received the cash, saying they reluctantly took the payouts as they thought they had no choice.

Among those who accepted the money were Hiroshima prefectural assembly members, local officials and mayors, as well as campaign staff members and supporters.