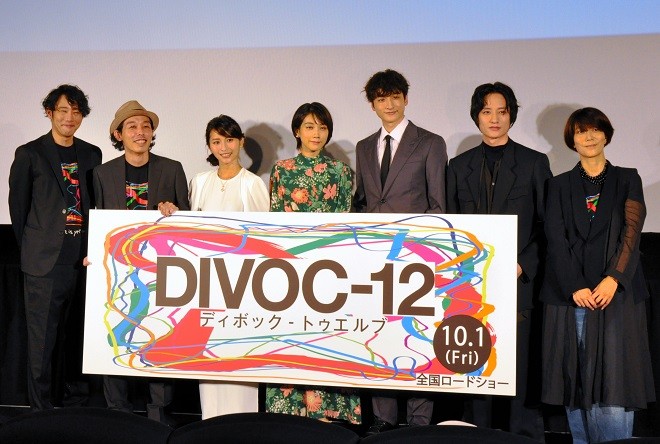 Zombies, fantasy and coming-of-age are part of the mix in a 12-director film project aimed at reversing the difficulties facing society in the COVID-19 pandemic.

The “DIVOC-12” project consists of 12 10-minute short films, and it let the directors’ creative energies explode on the big screen. (DIVOC is the reverse spelling of COVID.)

“DIVOC-12” is the brainchild of Sony Pictures Entertainment (Japan) Inc., and it used a relief fund established by Sony Group Corp. to support people affected by the novel coronavirus pandemic.

Part of the proceeds will be donated to the Japan Arts Fund, the company said.

Directors Yukiko Mishima, Shinichiro Ueda and Michihito Fujii each led a team in the project. Nine other directors, including newcomers, joined the project.

Each of the three teams had a different theme for their short films.

Mishima, known for “Dear Etranger,” picked “sharing” as her theme for “Yorokobi no Uta: Ode to Joy.”

“It is rare to see the world share exactly the same problem,” Mishima said of the pandemic. “It made me wonder what we can share together.”

Focusing on anxiety felt in society, the story centers around a lonely old woman (played by Sumiko Fuji) who meets a young man (Kisetsu Fujiwara) at a beach and agrees to do a shady job.

Ueda, whose “One Cut of the Dead” became a phenomenal hit, created “Yumemi no Hansei” (Half of Yumemi’s life) based on the theme of “touch.”

“I thought about what the sensation of touch had given us when we were deprived of cinemas, live concerts, theatrical plays and direct contact with others,” he said.

Starring Honoka Matsumoto, the short opens as a black-and-white silent film before sounds and colors are added. It appears to trace the history of cinema while paying homage to classic films.

Fujii, who won critical acclaim for “The Journalist,” was responsible for “Namonaki-ippen: Anna” (A chapter with no name: Anna), in which the protagonist (Ryusei Yokohama), who harbors a sense of loss, encounters a woman before they go out on a fantasy adventure.

His theme of “realization for growth” was also aimed at himself to reconfirm his starting point with fellow filmmakers.

“Our culture of storytelling will never disappear as long as there are people who won’t stop delivering it,” he said. “I want to keep trying without feeling depressed.”

Yohei Kikuchi, who was in charge of planning and producing the project at Sony Pictures Entertainment, added: “I wanted to support the creators by providing an opportunity to make films, and to help brighten the atmosphere of society and bring positivity even if only slightly."