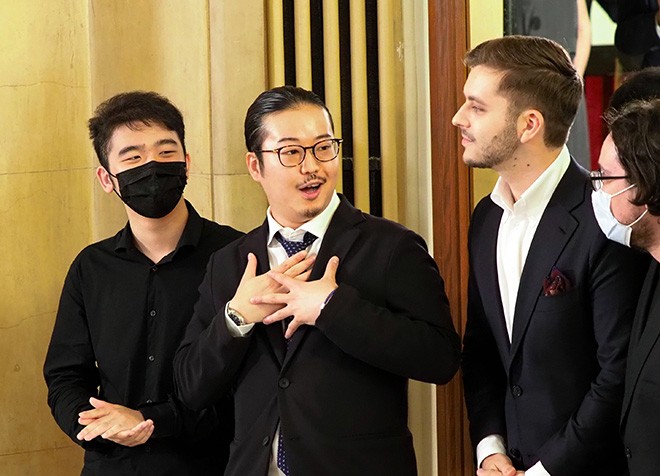 Kyohei Sorita is surprised at coming in second in the 18th International Chopin Piano Competition in Warsaw on Oct. 21. (Jun Nojima)

WARSAW--More than a half century after Mitsuko Uchida’s feat in 1970, Japan-born pianist Kyohei Sorita seemed unable to comprehend when he heard his name called out at the 18th International Chopin Competition here on Oct. 21.

Sorita, 27, of Tokyo, matched Uchida as the only Japan-born pianist to win the second-highest prize in the prestigious piano competition.

After realizing that he won the second prize, along with Alexander Gadjiev of Italy and Slovenia, Sorita placed his hands on his chest and looked amazed and delighted.

“I want to thank my (supervising) professor, parents and friends,” Sorita said in Warsaw in the early hours of Oct. 21.

At a news conference, Sorita said, “I’m so happy.”

“I can’t find the words to describe my feelings," he said. "I also felt pressure since the Chopin Competition is famous in Japan as well and many people were watching it on YouTube.”

The Chopin Competition is one of the world’s three major piano competitions and has helped launch the careers of some of the world's most acclaimed pianists such as Uchida.

No Japan-born pianist has ever won the Chopin, which started in 1927 and has been held every five years since 1955. Past winners include such greats as Martha Argerich, Stanislav Bunin and Maurizio Pollini.

Sorita attends the Chopin University of Music in Warsaw. He has been working both in Japan and abroad since his debut in 2016. He is promoting classic music by running an orchestra himself and streaming his concerts online.

Kobayashi, 26, who hails from Ube, Yamaguchi Prefecture, studies at the Curtis Institute of Music in Philadelphia. She was the only Japanese to reach the final stage in the previous Chopin Competition in 2015, but failed to place in sixth or above.

Kobayashi has performed on the international stage since she was 9 and released a CD at the age of 14.

More than 500 pianists from across the globe applied to enter this year’s Chopin Competition, which was initially scheduled for 2020 but postponed due to the spread of the novel coronavirus.

Of these, 87, including 14 Japanese, passed the preliminary round. Sorita, Kobayashi and 10 other contestants advanced to the final stage.