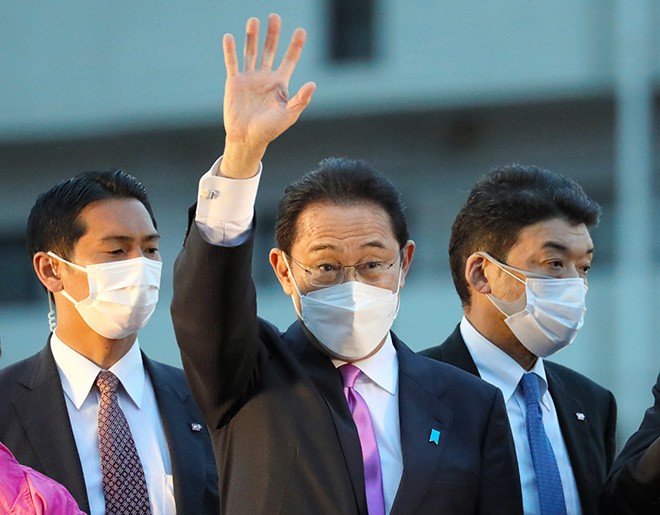 Prime Minister Fumio Kishida visited his home prefecture of Hiroshima for the first time since taking office but remained silent about a divisive issue the opposition is using there to hammer away at the ruling coalition.

Kishida spoke on Oct. 20 on behalf of a candidate from junior coalition partner, Komeito, running in the Hiroshima No. 3 district. The district was formerly represented by Katsuyuki Kawai of the ruling Liberal Democratic Party, but he resigned the seat after being indicted on a vote-buying charge.

The opposition is also raising questions about the 150 million yen ($1.3 million) distributed by LDP headquarters in Tokyo to the campaign of Kawai’s wife, Anri, when she ran in the 2019 Upper House election.

Kishida apologized for the indictment of an LDP lawmaker in the vote-buying scandal, but in his 14 minutes of speaking, he only devoted about 90 seconds to addressing the money scandal. Much of that time was spent outlining a proposal for legal revisions that would force lawmakers who lose their seats for breaking the law to return their salaries.

Kishida also conspicuously avoided another topic of great interest to Hiroshima voters: what Japan will do concerning the Treaty on the Prohibition of Nuclear Weapons.

Hiroshima victims of the atomic bombing have called on the government to ratify the treaty.

The distrust raised in Hiroshima by the money scandal remains a problem for the party. The LDP candidate running in the by-election to replace Anri Kawai was defeated by an opposition candidate.

Back in May, Kishida, as head of the LDP prefectural chapter there, had asked then-LDP Secretary-General Toshihiro Nikai to conduct a thorough investigation into the matter.

But after he became prime minister, Kishida said he has no intention of launching another investigation into the money given to Anri’s campaign.

Local Hiroshima politicians with ties to the LDP, including Takashi Nakamoto, the president of the Hiroshima prefectural assembly, are not happy. Nakamoto has said the public and Hiroshima residents are still not convinced by the LDP’s explanation.

Renho, an Upper House member with the opposition Constitutional Democratic Party of Japan, took a jab at Kishida when she visited Hiroshima on Oct. 14.

“I am nostalgic for the Kishida who joined prefectural chapter politicians in asking Nikai to look into the matter,” she said.

(This article was written by Takahiro Okubo and Tabito Fukutomi.)