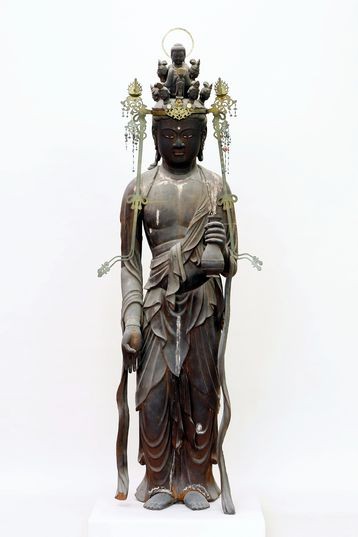 The 11-face Kannon standing statue is shown before repair work is carried out. (Provided by Bijutsuin)

NAGAOKAKYO, Kyoto Prefecture--An 11-face Kannon Buddhist statue kept at Otokunidera temple here that stands 180 centimeters tall and dates from the Kamakura Period (1185-1333) is only the third known example in Japan of an ancient wooden deity having been carved during a single day of devotion.

The “ichinichi-zoryubutsu” style of carving was authenticated by Kyoto Prefecture’s cultural property protection division during repair work that required the standing statue to be taken apart, officials said Oct. 14.

Restorers were astonished to discover numerous strips of paper secreted inside that detailed how the wooden object was completed by a Buddhist sculptor within a single day in the hope of fulfilling the wishes of those who made donations for the project.

Ichinichi-zoryubutsu refers to statues engraved by Buddhist carvers over the course of a day to pray for rain or the end to an epidemic.

Buddhist monks burned incense and chanted mantras while a master sculptor went about his work. Examples of ichinichi-zoryubutsu are characterized by their simple design and roughly treated surface.

The two already known are the Bhaisajyaguru standing statue kept at Saihoji temple in Uda, Nara Prefecture, which is a state-designated important cultural property, and the Amoghapasa standing statue in the collection of the Kawai Kyoto Bukkyo Bijutsu Zaidan (Kawai Kyoto Buddhism art foundation).

More than 200 fragments of paper were found inside the statue. The strips specify the name of each donor along with the fact that an entire day was spent to finish the creation from July 17 through July 18 in 1268.

The slips are likely from a list of those who made donations for the creation of the Buddhist statue in the hope of forming stronger bonds with Buddha.

Buddhist statues are thought to have often been produced based on such donor lists from the Heian Period (794-1185) to the Kamakura Period.

Takeo Oku, a chief inspector at the Agency for Cultural Affairs, noted that the name of a minor temple deeply linked to Kofukuji temple in Nara was written on the strips, so the “ichinichi-zoryubutsu was very likely created at Kofukuji.”

“Around that time, painters known as “sohitsu” (quick painting) completed two mandala charts in a single day,” Oku said. “Creating works of art promptly was important in that era to receive divine grace. We can conclude that Buddhist sculptors must have had an incredible level of skill in those days.”