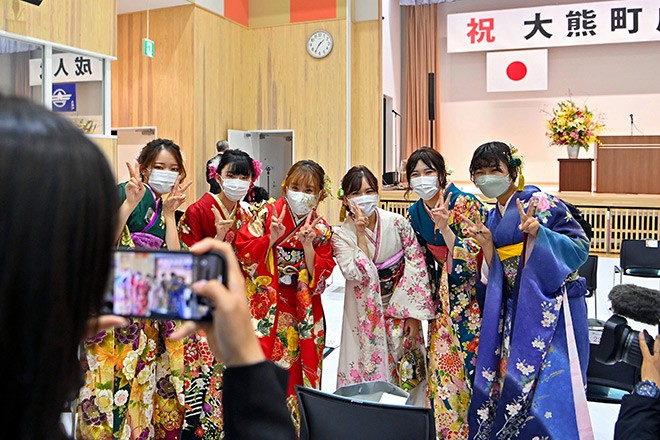 Participants pose for photos before the start of the Coming of Age Day ceremony in Okuma, Fukushima Prefecture, on Oct. 16. (Yosuke Fukudome)

It is probably difficult for the communities in Fukushima Prefecture ravaged by the nuclear disaster to describe the weight of their struggles over the past 10 or so years.

The government has decided to allow Tokyo Electric Power Co. to release treated radioactive water from the crippled Fukushima No. 1 nuclear plant into the Pacific Ocean.

Starting in 2023, radiation-contaminated water still being generated because of the need to cool melted nuclear fuel at the wrecked facility will be dumped into the sea after being treated with special equipment to eliminate most of the highly radioactive materials.

Tokyo Electric Power Company Holdings Inc. says the tanks storing the water within the complex will reach capacity in the next couple of years. But there are legitimate concerns the discharge could spawn harmful rumors that deliver an additional blow to already damaged local businesses, the fishing industry, in particular.

There is no telling when the evacuation order will be lifted for a large swath of the areas near the crippled plant with high levels of radiation, known as “kitaku konnan kuiki” (difficult-to-return zone). A total of 34,000 people still live as evacuees in other parts of Fukushima Prefecture or outside the prefecture.

Prime Minister Fumio Kishida, who took office earlier in October, has pledged to make “all-out efforts to rebuild and regenerate Fukushima.” He has told his Cabinet members that they are all “ministers in charge of Fukushima reconstruction.”

It was in the city of Fukushima that Kishida fired the opening salvos in the ruling Liberal Democratic Party’s campaign for the Lower House election.

But local residents remain wary of such political rhetoric. They are not certain whether politicians are really committed to their promises to support Fukushima. They are wondering if the communities devastated by the nuclear accident are actually beginning to sink into political oblivion.

Kosaburo Nishime, who has been appointed by Kishida as minister in charge of rebuilding Fukushima, serves concurrently as minister responsible for issues concerning his native Okinawa and the Northern Territories.

Nishime is the first minister in charge of Fukushima reconstruction who holds more than one Cabinet post. The past nine ministers assigned to the job served for only about one year on average in the post.

The state ministers at the industry, environment and farm ministries who had been listening to the voices of local communities and industries over the method of disposing of treated water have been replaced. It is hardly surprising that local residents are doubtful of the government’s commitment to supporting them after years of frequent changes of officials in charge, which forced them to “start again from scratch.”

The campaign platforms of the LDP and other parties are unlikely to do a lot to allay their concerns.

As one of its policy priorities, the LDP promises to make “every possible effort to ensure that the government will work on the forefront of making it possible for all local residents to return home if they wish to do so during the 2020s.” But many of the Fukushima-related planks on the ruling party’s platform are in line with the promises the government has made and devoid of specific measures.

The Constitutional Democratic Party of Japan, the largest opposition party, pledges to “accelerate reconstruction through efforts focused on the livelihoods and regeneration of the disaster-hit communities.” But this promise was mentioned at the end of the section of the party’s platform about “protecting the lives and livelihoods from the new coronavirus.”

The issues of Fukushima reconstruction or the decommissioning of the reactors at the disabled nuclear plant were not mentioned directly in any of the 20 policy proposals the CDP and three other opposition parties have agreed to along with a citizen advocacy group called the Civil Alliance for Peace and Constitutionalism.

The parties have good reason to focus on such immediate policy challenges as the COVID-19 pandemic and economic recovery. But the rebuilding of the battered cities and towns in Fukushima is also an ongoing challenge that requires serious attention and consideration from the entire nation.

The role of political leaders in tacking this challenge is to untangle the complicated reality and offer viable options for solving the problems.

Many questions need to be cleared up. What conditions do the reactors need to be in for them to be declared “decommissioned?” What kind of future should the areas around the plant pursue after the cleanup work is completed?

Even if it is difficult to lay down a clear-cut future vision for the areas given great uncertainty surrounding the challenge, the parties should at least describe their plans to sort out the consequences of what occurred in 2011.

Voters can and should carefully monitor the stances of the parties and candidates toward the formidable task of reconstructing Fukushima to evaluate the commitment and tenacity they would demonstrate in tackling tough policy challenges.