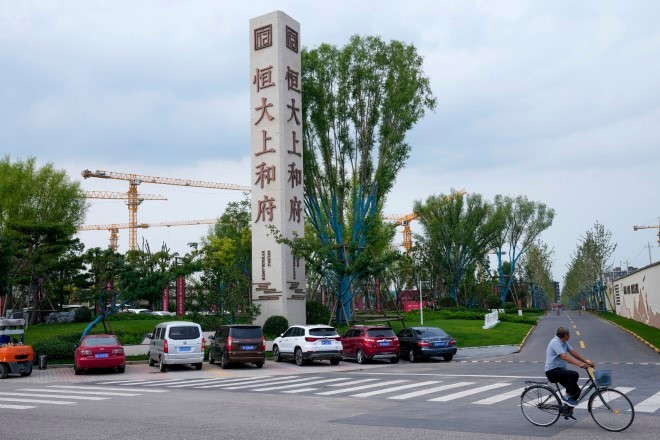 In this Sept. 15 file photo, a man bicycles past an Evergrande new housing development in Beijing. (AP Photo)

Evergrande Group's struggle to reduce its 2 trillion yuan ($310 billion) of debt to comply with tighter official curbs on borrowing has prompted fears a default might trigger a financial crisis. Chinese officials have tried to ally investor fears by saying the debt problems can be controlled and there should be no impact on the financial industry.

Evergrande wired money on Friday to a Citigroup account for a bond payment that was due Sept. 23, the Securities Times reported, citing unidentified sources.

Evergrande missed payments in late September and early October to investors in U.S. dollar-denominated bonds issued abroad. The company said Wednesday a 30-day grace period to make those payments before it would be declared in default had yet to expire.

Economists say Beijing can prevent a credit crunch if Evergrande defaults on debts to Chinese banks and bondholders but wants to avoid appearing to arrange a bailout while it tries to force other companies to reduce reliance on debt.

The slowdown in construction helped to depress China’s economic growth an unexpectedly low 4.9 percent over a year earlier in the three months ending in September. Forecasters expect growth to decelerate further if the financing curbs stay in place.