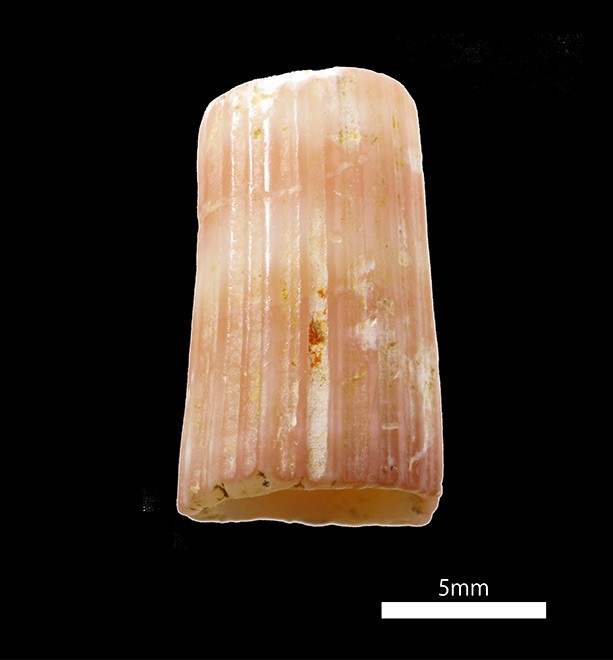 NAHA--Researchers in Okinawa Prefecture have confirmed the discovery of the oldest artificially colored ornament ever found in Japan.

Officials of the Okinawa Prefectural Museum and Art Museum made the announcement on Oct. 21 about a shell bead unearthed in a dig at the Sakitari Cave site in Nanjo, Okinawa Prefecture, eight years ago.

“There have been examples of colored beads found in Southeast Asia and Australia,” said Shinji Yamasaki, a museum curator involved in the dig at the Sakitari Cave site. “The latest finding may lead to uncovering the roots of the Paleolithic people at the site.”

The bead was made from a tusk shell cut into a ring. It was about 1.3 centimeters long and is believed to be from the late Paleolithic Period about 23,000 years ago.

They discovered red pigment in the groove of the shell bead.

An analysis of the pigment found a high iron content, leading researchers to surmise it was iron oxide, a material widely used for red coloring after the Jomon Pottery Culture Period.

The shell bead was the first finding of artificially applied pigment. Red pigment had also been found attached to a mortar and pestle from about 35,000 years ago at the Musashidai site in Fuchu, western Tokyo.

Other findings from the Sakitari Cave site have led to speculation that clam and tusk shells were used to make fishhooks, knives and ornaments about 23,000 to 20,000 years ago. And it is possible that pigment was applied to some of the ornaments.

Another item unearthed from a layer about 16,000 to 13,000 years ago from the Sakitari Cave site appears to be a form of crayon about 1.6 cm long with a diameter of about 0.7 cm.

The bead will be on display from Oct. 22 as part of the exhibition “Shellmound age: coral sea, dugong and humans in Okinawa” at the museum.