Thieves in three vehicles steal an item from a confiscated car being towed through a road in Osaka late on Oct. 21 despite the tow truck being flanked by police vehicles. (Provided by a man) 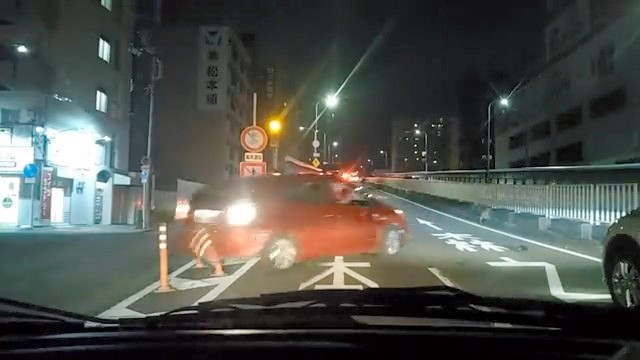 One of the three cars apparently carrying thieves goes in reverse to flee from the crime scene in Osaka’s Abeno Ward on Oct. 21. (Provided by a man)

OSAKA--Thieves pulled off a daring heist from a confiscated car that was being towed through a road in Abeno Ward here late on Oct. 21, despite being flanked by police cars.

The two police cars and tow truck were engaged by a group riding in three cars who grabbed an item from the seized car, the Osaka prefectural police said on Oct. 22.

Police said the sudden attack occurred while a wrecker was towing a passenger car seized in a theft case to a police station. Police are investigating the incident as a robbery case.

According to police, a theft from a vehicle was reported in Higashinari Ward in the same city on the afternoon of Oct. 21.

Police found the passenger car believed to have been used by the culprit based on security camera footage and the investigation, and confiscated it at a parking lot in Abeno Ward.

While police were taking the car to Higashinari police station, the attack occurred on the road around 10:30 p.m. on the same day.

The police were sandwiching the wrecker pulling the confiscated passenger car between a patrol car and a police vehicle carrying the investigating officers.

A suspicious white car tried to cut into the line of the police cars, causing the tow truck to slow.

Another white vehicle approached from the rear and ran side by side with the wrecker.

A person jumped out of the front passenger’s seat as both vehicles were in motion, opened the door of the confiscated car and grabbed an object from inside, and fled.

A third red car, apparently connected to the same group, also fled from the scene.

The intruding vehicles hit the wrecker and other nearby vehicles, but no injuries were reported.

A similar incident occurred in Osaka Prefecture on Sept. 1 when an item was grabbed from a confiscated vehicle being towed by a wrecker in Kishiwada city.

The seized vehicle had been reported stolen. It is believed that someone approached the vehicle and removed something like a bag from inside after a patrol car that had been behind the wrecker moved away.