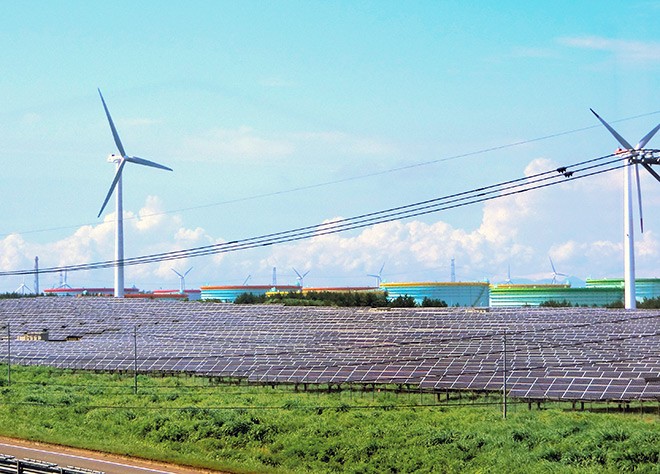 The Cabinet of Prime Minister Fumio Kishida on Oct. 22 approved a new basic energy plan that will double the percentage provided by renewable energy sources in fiscal 2030 in comparison to the level of fiscal 2019.

Despite the plan's ambitious goal regarding renewable energy sources, Japan may have still left itself open to foreign criticism because of continued dependence on coal-fired thermal power plants.

The goal for fiscal 2030 is to have renewable energy sources, such as solar and wind power, provide between 36 to 38 percent of Japan’s total energy needs.

The goal for nuclear power will be kept unchanged from the last basic energy plan six years ago to between 20 and 22 percent.

But while coal-fired thermal power plants will be restrained to 19 percent, that goal could receive a frosty reception when the U.N. Framework Convention on Climate Change (COP26) meets later this month in Britain because many European nations have pledged to stop the use of such thermal plants.

The newest plan is the first revision since then Prime Minister Yoshihide Suga pledged in autumn 2020 to have Japan reach net zero emissions in greenhouse gases by 2050.

In the latest basic energy plan, renewable energy sources are described as a “main source of electricity.” The plan calls for placing maximum priority on installing such power sources as much as possible. The percentage of renewables was greatly increased from the 22 to 24 percent of the plan six years ago.

The goal for nuclear power means efforts will continue to have utilities resume operations at existing plants.

The plan also aims to reduce the percentage of electricity generated at thermal power plants using coal and liquid natural gas from the approximately 76 percent of fiscal 2019 to 41 percent in fiscal 2030.

It also calls for accelerating research on using a hydrogen-ammonia fuel source in thermal plants that does not emit any carbon dioxide when the fuel is used.

The goal for fiscal 2030 for that energy source has been set at 1 percent.

Despite the lofty goal set for renewable energy, one hurdle is that most sites considered feasible for solar panels have already been taken up.

The goal for nuclear power can only be met if all existing reactors resume operations, but that may be difficult due to the strong public opposition to nuclear energy.