Outdoor booze ban in effect near Shibuya Station for Halloween 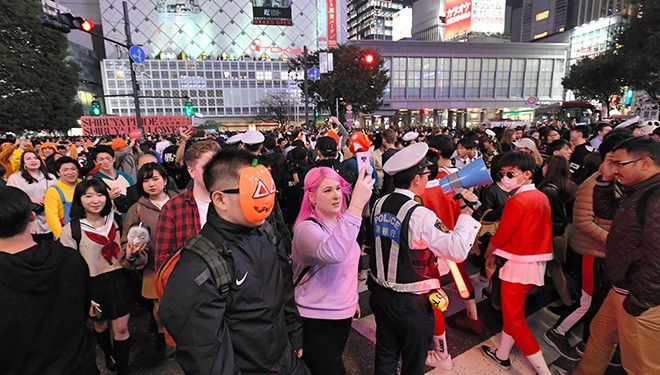 Tokyo’s Shibuya Ward will prohibit drinking alcohol along the roads and squares surrounding Shibuya Station on Halloween weekend to prevent the buildup of crowds and rowdy incidents that have erupted in the past.

The move comes as the Tokyo metropolitan government will lift restrictions on serving alcohol at certified bars and restaurants on Oct. 25 in response to a steady drop in new COVID-19 cases.

Shibuya Ward officials are bracing for a larger turnout during this year’s Halloween weekend as many people are stressed out after being asked to exercise self-restraint for a prolonged period to curb infections.

“I don’t mean to discourage people from enjoying the festivities, but I want them to stay home to prevent the spread of the virus,” Shibuya Ward Mayor Ken Hasebe said at a news conference on Oct. 21.

The ward will prohibit drinking alcohol on the streets on Oct. 24 and between Oct. 29 and Oct. 31, ward officials said at the news conference.

The ban will be imposed for up to 11 hours from 6 p.m. each day during that period in areas around Shibuya Station, including squares, as well as the Shibuya Center-gai entertainment street, the Dogenzaka shopping district, the Bunkamura-dori street and other downtown districts.

Shibuya Ward will impose the prohibition on drinking alcohol outdoors based on its ordinance that took effect in 2019 to prevent drunken revelers from engaging in vandalism at Halloween and on New Year’s Eve.

The ward will mobilize some 100 security guards to the targeted areas and have its officials patrol there during the period. It will also ask 42 establishments nearby, including convenience stores, to refrain from selling alcohol on Oct. 30 and 31.

The ward used to set up temporary portable toilets and changing spaces for Halloween partygoers before the pandemic, but will not do so this year.

While some costume-clad revelers gathered in the Shibuya district last year during Halloween despite the pandemic, the overall turnout was much smaller than in 2019.

Shibuya Ward will sponsor online Halloween events as it did last year to encourage partiers to enjoy the occasion from home.