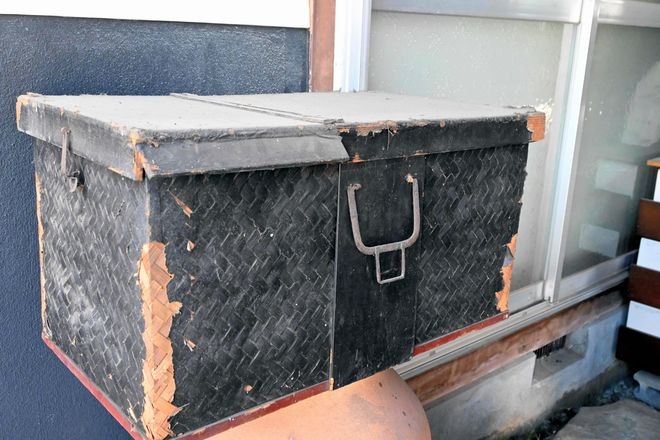 The traditional container in which the records were discovered is shown in Nakano, Nagano Prefecture. (Daisuke Shimizu)

NAKANO, Nagano Prefecture--A stunning cache of historical documents from the files of the imperial Privy Council dating from the Meiji Era (1868-1912) turned up in the unlikeliest of places, a storage facility of a fruit farmer here.

Takenori Tanaka came across the valuable prewar archive three or so years ago while tidying up a storehouse on his property used for generations to house reams of old documents and other items.

Noticing a blackish case on a shelf on the second floor of the “kura,” Tanaka, 67 opened it and made what one expert labeled “a surprising discovery” wrapped in a dark blue cloth.

A photo tucked inside the bundle of documents was of a building with the words “the Privy Council’s structure” written by hand on the back.

When Tanaka visited the National Archives of Japan in Tokyo’s Chiyoda Ward with his find, officials were astonished that such “precious records” had survived.

Archives experts spent months combing through the materials and confirmed they constituted records associated with the emperor’s top advisory body under the Constitution of the Empire of Japan, or the Meiji Constitution.

The haul includes a letter penned by Kaneko Kentaro (1853-1942), who drafted the Meiji Constitution with Japan’s first prime minister, Ito Hirobumi (1841-1909). The missive was addressed to Hara Yoshimichi (1867-1944), the chairman of the Privy Council who hailed from present-day Suzaka in Nagano Prefecture.

Another interesting discovery was a letter to a secretary by Hiranuma Kiichiro (1867-1952), who resigned as prime minister after the conclusion of the German-Soviet Nonaggression Pact, saying that Europe’s situation was “complicated and bizarre,” as well as a receipt.

A travel application submitted by the Privy Council’s chair to the prime minister, a request for a change of air for health reasons, the English draft of Japan's postwar Constitution and a host of other items were among the 326 documents.

An archives representative, explaining the significance of the find, said: “It was common for documents relating to clerical processes to be quickly discarded in those days, just like today. They illustrate everyday procedures that the Privy Council handled.”

How the records on the prewar advisory panel ended up in a farmer's storehouse, given that none of Tanaka's ancestors had any known connection with the key government entity, is anyone's guess.

However, Tanaka has his own theory. Noting that many formal official documents were destroyed in the aftermath of the nation’s defeat in World War II, Tanaka speculated that someone “tried to keep important records alive and brought them back.”

The Tanaka family had considerable local standing in the Edo Period (1603-1867). A distant ancestor served as a village head and operated a private educational institution to nurture teachers for unofficial elementary schools centuries ago.

The earthen storehouse on Tanaka's property housed all sorts of educational tools, textbooks and an abacus as well as measuring instruments, maps and other artifacts from bygone days.

“Textbooks and a medical publication with anatomical charts dating back to the Edo Period and early Meiji Era used to be kept there, but I never went inside during my childhood because it was dark and terrifying,” Tanaka said. “My parents ended up burning many documents in storage (after the war).”

After reaching adulthood, Tanaka started thinking about what significance the incinerated artifacts might have had. In 2003, Tanaka set up a private museum at his residence to exhibit a number of materials he had found in the storehouse.

“Once things disappear, there is no way to recover them in their original state,” Tanaka added. “Such things constitute culture in my opinion.”

The Privy Council records have temporarily been entrusted to the national archives for historical research purposes.

“Any families can own artifacts that one would never believe they had,” Tanaka said. “I recommend that owners, rather than throwing things away, pause for breath and seek advice from others.”