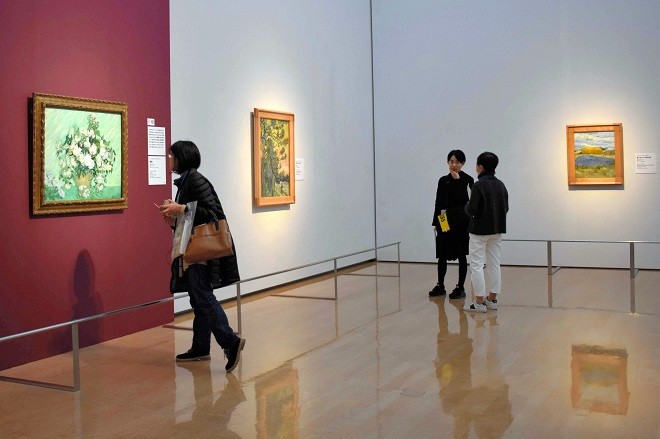 In her first year of collecting, she invested the equivalent of 6.8 million yen ($60,000). By her third year, she had raised the amount to 20 million yen and two years later to 288 million yen.

I was overwhelmed by her collecting mania when I visited the Tokyo Metropolitan Art Museum in the capital’s Ueno district to view an exhibition titled “Collecting Van Gogh: Helene Kroller-Muller’s Passion for Vincent’s Art.”

Kroller-Muller was in her 30s when she first came across the works of this Dutch painter who had died in obscurity. Something about his tragic life must have resonated with her at a profound level.

According to Natsuko Ohashi, a curator at the museum, Kroller-Muller was fabulously rich but her life was often troubled.

Her parents forbade her to pursue her youthful dream to become a teacher. After she started her own family, her four children rebelled against her.

“She was especially distraught when her oldest daughter falsely accused her of having an affair with a younger man,” said Ohashi.

Her father was a prosperous supplier of raw materials to the mining and steel industries. But when World War I ended, so did the special wartime boom, too, and the family business took a serious financial hit.

Kroller-Muller’s art collection slowed down. She was also forced to suspend her plans to build an art museum.

Still, she continued to believe in her undertaking, convinced that van Gogh’s paintings had the power to “touch the edge of the soul.”

She died in 1939, one year after fulfilling her dream of opening The Kroller-Muller Museum, a national art museum and sculpture garden in the Netherlands.

At the Tokyo Metropolitan Art Museum, I saw a photo of her coffin surrounded by van Gogh paintings.

This reminded me of a Japanese tycoon who acquired a van Gogh at an auction during the era of the asset-inflated economy, and allegedly asked that the painting be placed in his coffin upon his death.

When Kroller-Muller started collecting van Goghs, she, too, initially intended to keep all the works solely for her own enjoyment. Some time later, however, she reportedly decided to share them with the public.

She amassed more than 270 works.

Had it not been for her, I would not have had the chance to enjoy a substantial number of van Gogh masterpieces all in one place in Tokyo this autumn.

I thanked her for her passion and determination, as well as her wealth.