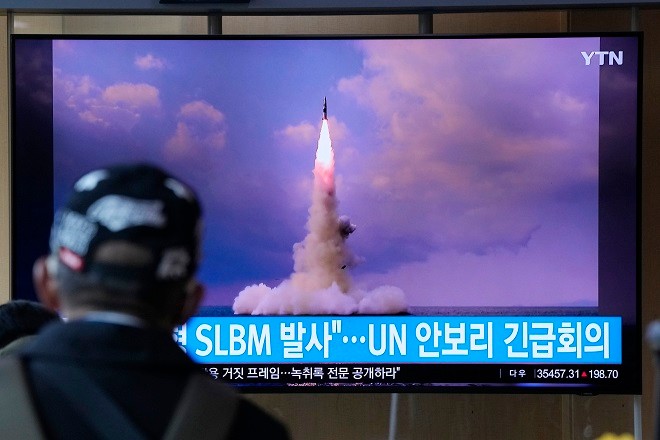 North Korea used a submarine to test-fire a new type of ballistic missile into the Sea of Japan on the day official campaigning kicked off for the Oct. 31 Lower House election, a clear violation of U.N. Security Council resolutions.

The international community needs to redouble its efforts to ensure the reclusive country is held liable for its reckless arms development and provocative actions.

Pyongyang’s move prompted Prime Minister Fumio Kishida to announce he would consider giving the Self-Defense Forces the ability to strike enemy bases overseas. Experts, however, raised doubts about whether such a strategy was realistic or would be effective.

Instead of debating possible military responses, which never fundamentally resolve a situation, political leaders should focus on analyzing North Korea’s true motive and seek ways that could usher in marked and meaningful progress in the longstanding security issue.

North Korea has a history of taking dangerously provocative actions timed to raise the ante when major national elections are being in Japan and South Korea. South Korea refers to this tactic as the “North Wind.”

Pyongyang resorts to this behavior in the belief that raising regional tensions makes other countries take notice. It also plays to a domestic audience.

From this point of view, it is possible that North Korea even welcomes rising in calls in Japan for the government to adopt a more hard-line stance against Pyongyang. Japanese politicians should tread cautiously in responding to the country’s provocative acts.

The most urgent task for the government in dealing with North Korea is to revive the channel of bilateral communication.

The administration headed by Prime Minister Shinzo Abe initially pursued a hard-line stance with seemingly steadfast determination. But as soon as talks between North Korea and the United States began, Abe made an about-face and proposed to meet with North Korean leader Kim Jong Un without setting conditions. Pyongyang rebuffed Abe’s proposal, which signaled a lack of policy integrity, with the result that the impasse in the Tokyo-Pyongyang relationship continued.

There is no disputing the need for dialogue with this secretive country if Japan wants to make progress on outstanding bilateral issues, such as Pyongyang’s past abductions of Japanese citizens. While it needs to make its demands clear to North Korea, Tokyo should act swiftly to repair the dysfunctional framework for direct talks instead of simply following the U.S. lead.

South Korea’s programs to develop advanced military technologies also require close monitoring, even though they tend to be overshadowed by the North’s provocations.

In South Korea, the administration headed by President Moon Jae-in has adopted the slogan of “independent national defense.” In addition to ramping up defense spending, some of its moves would seem to go beyond the objective of defending against possible attacks from North Korea. They include agreeing with the United States to lift a limit on the range of missiles it can develop and the development of a submarine-launched ballistic missile.

Japan and South Korea, both major U.S. allies, need to work closely in security matters. But based on their different accounts of how many missiles North Korea has fired, it would appear that Tokyo and Seoul do not even effectively share important information concerning national security.

This no doubt is due to a row between the two countries over their perceptions of shared history, which has had a negative effect in their respective security and economic areas as well. While issues relating to the past are important, they should not be allowed to seriously damage current and future bilateral ties.

Despite the deep political strains between Japan and South Korea, now said to be at their worst-ever level, related campaign promises of the Constitutional Democratic Party of Japan, the nation’s largest opposition group, amount to nothing more than mere basic policy principles that echo those upheld by the ruling Liberal Democratic Party.

Fixing a soured diplomatic relationship is the role of political leaders. Both North and South Korea are Japan’s neighbors and former colonies. Japan has no choice but to face up to the sticky issues with these countries and work hard to overcome them so that its ties with them can improve.