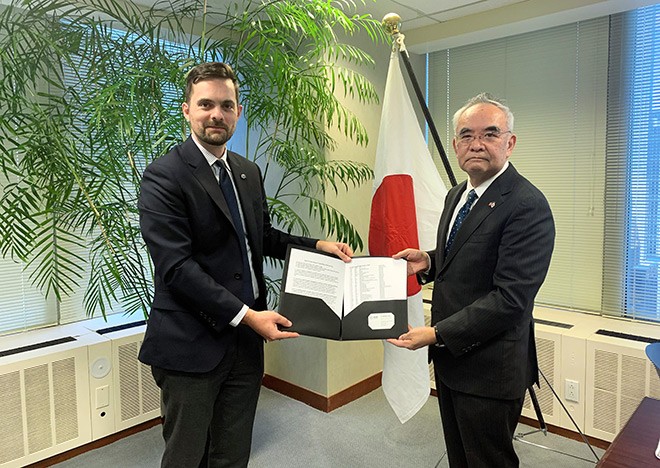 NEW YORK--Hundreds of academics in Japan-related fields called on Tokyo to resume issuing student visas, put on hold because of the COVID-19 pandemic, as soon as possible.

A petition signed by 656 scholars and others at mostly U.S. universities and research organizations was submitted to the Japanese Consulate General here on Oct. 21.

The government ceased issuing student visas in January due to the novel coronavirus pandemic. A limited number of visas have been issued since May, but only for students funded by the Japanese government. That effectively shut out almost all foreign students because 96 percent of those coming to Japan paid their own way or received private funding prior to the pandemic.

The petition states that the visa suspension “has eroded the global relationships and reputations of Japan’s educational institutions.”

It was submitted by Paul Hastings, executive director of the New York-based Japan ICU Foundation, which has close ties to International Christian University in western Tokyo.

The document says ties with foreign universities are under strain because Japanese students have been allowed to pursue their studies overseas while those wanting to do the same in Japan are not allowed to do so.

“The dwindling number of foreign students reverses progress made in the internationalization of Japanese universities,” the document states. In addition, the futures of American students and researchers with deep ties to Japan are possibly at risk because they are unable to study in Japan.

That could “result in an overall decrease in interest in Japan within the field of higher education,” the petition states.

According to Hastings, signatures for the petition were first sought about three weeks ago.

While acknowledging the importance of international exchanges, Yamanouchi explained that the government measure was designed to protect the Japanese public from a further spread of COVID-19 cases, and asked for understanding.