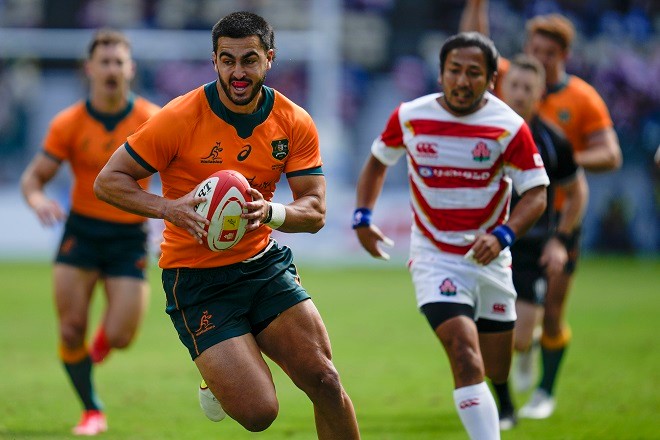 Australia’s Tom Wright runs in to score his team's first try during the rugby international between the Wallabies and Japan in Oita, Japan, Saturday, Oct. 23, 2021. (AP Photo)

The Showa Denko Dome which hosted Saturday’s match was the venue where the Wallabies lost to England in the quarterfinals of the 2019 World Cup.

Flyhalves Quade Cooper for Australia and Rikaya Matsuda for Japan were influential figures as the teams struggled through an error-ridden match, deprived of continuity mainly by a high number of breakdown penalties.

Cooper threw crucial passes in both of Australia’s first-half tries, then kicked a penalty to allow Australia to turn a one-point lead to a four point margin, 17-13, at halftime.

Australia seemed on top when it scored two tries early in the second half. But Japan came back strongly, scoring a try while down to 14 men in the 55th minute to leave the Wallabies with a seven-point margin which narrowed further with another Japan penalty.

Replacement hooker Connal McInerney carried the ball in a well-executed lineout drive in the 78th minute to score a try on test debut which inflated Australia’s winning margin.

Australia maintained its unbeaten record in tests against Japan but would have been disappointed with the quality of its performance. It won its five previous matches against Japan by average of 39 points.

Australia had large advantages of territory and possession in the first half but its attack only functioned well in fragments in which Cooper was especially prominent.

The Wallabies started strongly. In the seventh minute Cooper found backrower Rob Valetini with a good pass which put Australia on the front foot. From rare, quick ball Cooper was able to dictate play, pivoting in midfield and handing off a short pass to winger Tom Wright who out-paced the defense to score.

Australia started the second half strongly. A well-worked move from an attacking lineout in the 43rd minute made a try for powerful prop Taniela Tupou.

The ball was taken at the front of the lineout, Valetini dodged down the touch line and fed hooker Folau Fainga’a, whose timed pass inside allowed Tupou to crash through the defense.

Japan was reduced to 14 men in the 49th minute when 'Lomano Lemeki was sin-binned for a shoulder charge and two minutes later Rob Leota scored on the left wing side. After interplay between Cooper and Paisami, Len Ikitau passed to scrumhalf Nic White who kicked ahead and recovered his own kick. As Japan’s defense tried to regroup, the ball went quickly wide to Leota who scored near the corner.

Japan trailed only by less than the margin of a converted try until McInerney put the issue beyond doubt.