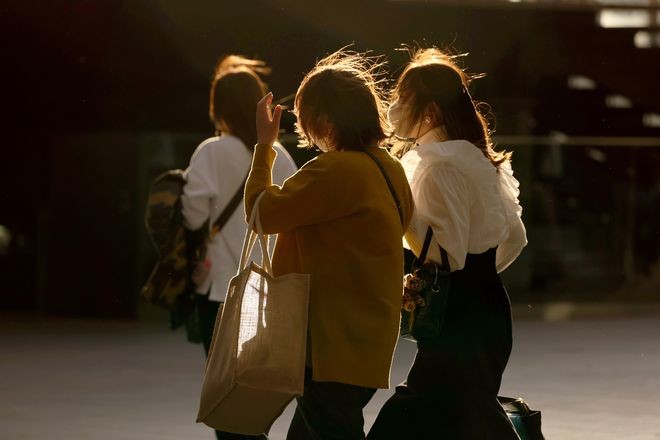 People walk in strong winds near JR Osaka Station in Osaka's Kita Ward on Oct. 23 when “kogarashi ichigo,” or the first wintry wind of the autumn, blew in the Kinki region earlier than usual.

What's fun about playing the seeker in hide-and-seek is that the world has changed dramatically when you open your eyes. The many friends who were there have disappeared.

From time to time, the season also changes in a dramatic way. “Kakurenbo/ Mittsu kazoete/ Fuyu to naru” (Hide-and-seek/ Count to three/ And it’s winter). The short poem was composed by Shuji Terayama (1935-1983).

The playwright’s poem also sounds like a metaphor for scene shifting in theater. Just as settings for a play change in darkness between acts, it seems the season has suddenly changed to winter.

In the western Kinki region around Osaka, “kogarashi ichigo,” or the first wintry wind of the autumn, blew on Oct. 23, earlier than usual.

In many recent years, the period of lingering summer heat has tended to drag on. Autumn appears to have become shorter. This reminds me of “Boku no Okurimono” (My gift), an old song of Off Course, a Japanese folk rock band that was popular in the 1970s and 1980s.

“Autumn is placed between summer and winter/ That is why autumn is a little fuzzy.”

Autumn is a season that is to be fully relished, regardless of how its length has become less than it should be.

If you walk under “clear autumn skies,” if not yet “clear winter skies,” you still encounter a field of yellow cosmos (Cosmos sulphureus) or a garden where autumn roses are blooming. You also see leafless persimmon trees laden with fruits that look like a bunch of lights.

Recently, when I think of taking a walk before sunset, I often find it's too late. Japanese painter Toshio Mitsuhashi (1920-2001) depicted a fleeting moment in the autumn evening in a short poem.

“As I turn the corner/ Of a stone wall/ Three times/ I am in the dusk of autumn.”

While the poem is about an autumn evening, the phrase “aki no kure” (the dusk of autumn) also means the latter part of autumn, according to notes by literary critic Kenkichi Yamamoto (1907-1988).

Some people must have woken up to a cold morning due to radiative cooling. It is often said that in spring one sleeps a sleep that knows no dawn.

In this time of the year, it's hard to get out of your futon even if you wake up at dawn. If you open a window in early morning, however, a crisp and chilly air says good morning to you.