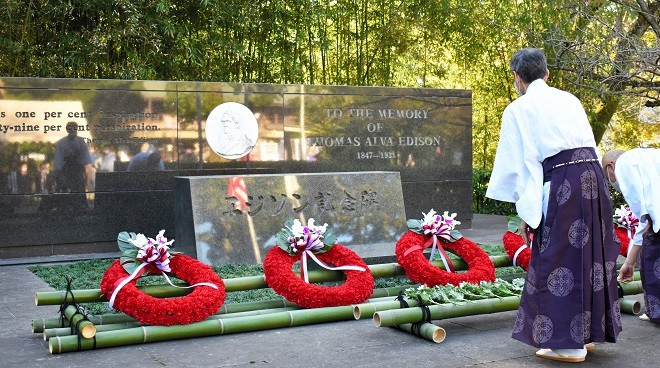 YAWATA, Kyoto Prefecture--Iwashimizu Hachimangu shrine here is a government-designated national treasure, but it is also home to a relatively unknown monument dedicated to Thomas Edison (1847-1931).

To commemorate the achievements of the great American inventor, a flower-offering ceremony was held at the Edison monument on Oct. 15, three days before the 90th anniversary of his death.

Although there are no records of Edison actually visiting Japan, a connection to this country helped him to light up the world.

Edison was born in Milan, Ohio, and is said to have dropped out of elementary school after only three months.

Working in Menlo Park, New Jersey, Edison gained fame through his various inventions, including the phonograph. His Kinetoscope, which showed moving images through a pinhole, was the forerunner to the modern motion picture camera.

The “Wizard of Menlo Park” obtained more than 1,000 patents before he died at age 84.

At one time, a Japanese assistant worked at Edison’s laboratory.

According to the shrine, after Edison put an incandescent electric bulb into practical use, he found the bulb had a longer life if carbonized bamboo was used for the filament. The material came from the blades of a hand fan, which was a souvenir brought from Japan.

When Edison sought bamboo from around the world, he was introduced to Japanese timber bamboo through the Kyoto governor at the time.

The bamboo was growing in an area around Mount Otokoyama, where Iwashimizu Hachimangu shrine is located.

The inventor used the plant, and the light bulb glowed for 1,000 hours. It became a worldwide hit.

The success also led to the foundation of the monument at the shrine in 1934.

A ceremony to celebrate his accomplishments is held on the days before and after the anniversary of his death, as well as on his birthday (Feb. 11).

When Edison’s daughter visited the shrine in 1964, she reportedly said she had never seen such an impressive monument in the United States.

The Oct. 15 ceremony was attended by Hiroaki Takahashi, head of the Japan Electric Association who also serves as president of an association founded to promote Edison’s achievements, a representative of the U.S. Consulate in Osaka, and other parties.

During World War II, the shrine was asked to remove the monument because of its dedication to a national of an enemy state.

“The head priest and others had protected the monument, saying that science had no borders,” the current head priest, Tsunekiyo Tanaka, said. “We want to protect Edison’s legacy and monument to pass them down to the next generation.”