Algae that killed off marine life in Hokkaido from Russia 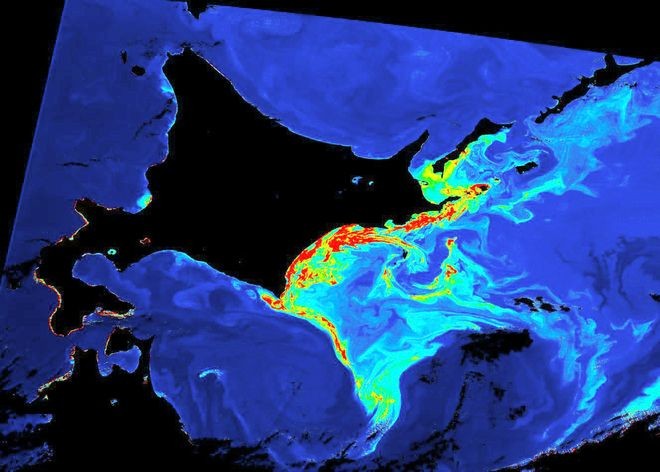 The distribution in the concentration of phytoplankton in waters southeast of Hokkaido shown in satellite images taken Oct. 9. The red portions are where it exists in a high density. (Provided by Hokkaido University)

A red tide that devastated marine life off the northernmost main island of Hokkaido apparently was caused by algae drifting from Russia on an ocean current, Japanese researchers said.

The scourge triggered wholesale deaths of salmon and sea urchins, resulting in damages totaling 7.6 billion yen ($67 million) to the local fishing industry. The figure is expected to rise further in the days and weeks ahead.

Researchers with Hokkaido University suggested that phytoplankton, which has proliferated since mid-September, reached Hokkaido via the Kuril Current.

The study by Takahiro Iida, a researcher specializing in environmental dynamic analysis, Takeshi Yoshimura, an associate professor of marine chemistry, and their colleagues took samples of water in Akkeshi Bay in eastern Hokkaido for analysis, using a university training ship between Oct. 5 and Oct. 13.

They observed the red tide drifting in strips and measured things like the concentration of salt, water temperature and direction of the tide at around 30 locations between 2 kilometers and 20 km offshore.

The readings of salt concentration and water temperature pointed to characteristics of the cold Kuril Current, according to the group.

The Kuril Current makes its way down to the coast of Hokkaido and the northeastern Tohoku region after flowing south along the Kuril Islands from Russia.

Its salt density and water temperature are lower than those of the Black Current, which flows north from the East China Sea to make it to Japan’s southern coast.

Researchers also estimated the volume of phytoplankton in waters off Hokkaido from images taken by the Global Change Observation Shikisai satellite operated by the Japan Aerospace Exploration Agency (JAXA).

They found that a high density of phytoplankton existed to northeast of Etorofu, one of the islands in the Northern Territories whose ownership is disputed between Japan and Russia, on Sept. 4.

Water with high concentrations of phytoplankton that arrived close to the eastern tip of Hokkaido on Sept. 16 proliferated there even more before spreading along the coast from the Nemuro and Hidaka areas on Oct. 9.

Studies by the Hokkaido Research Organization’s Fisheries Research Department, the University of Tokyo’s graduate school and other research institutes showed that the devastation to Hokkaido's seafood resources caused by red tide was triggered by Karenia Selliformis, a variety of phytoplankton which can multiply profusely even in relatively low temperatures.

“It has yet to be determined exactly where Karenia Selliformis first occurred, but it is highly likely that it flowed south from the Russian coast through the Kuril Current,” Iida said. “With further analysis, we hope to discover the mechanism of the red tide that formed in cold waters so we can predict when the next red tide will occur.”

The Hokkaido prefectural government announced Oct. 21 that its estimate for damage to the local seafood industry as of Oct. 18 was 7.6 billion yen, up markedly from 4.6 billion yen as of Oct. 8.

Prefectural officials said 21,300 salmon perished, resulting in a loss of about 55 million yen in fishing revenue.

Losses from deaths of about 2,300 tons of sea urchins, a coveted delicacy, were put at 6.84 billion yen. The figure is expected to rise further as fisheries officials are still trying to assess damages in the Hidaka area.

(This story was compiled from reports by Shigehito Nakazawa and Yuta Kayaba.)