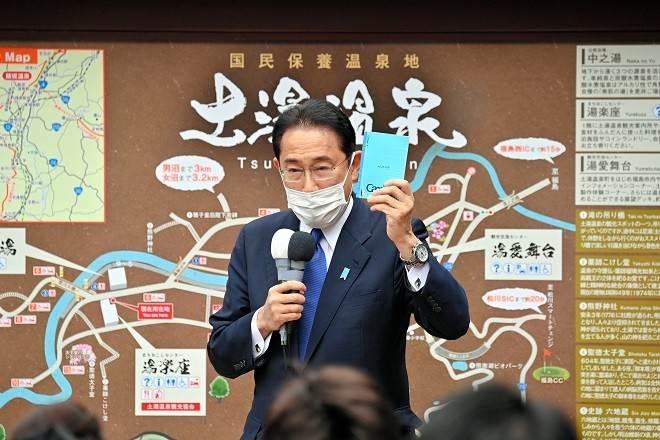 Fumio Kishida holds a notebook, in which he has jotted down comments from voters, during a stump speech in Fukushima on Oct. 19. (Kotaro Ebara)

FUKUSHIMA--Prime Minister Fumio Kishida has credited himself with the “ability to listen” to the public. But ahead of the Lower House election, he appears more intent on listening to certain elements of the ruling Liberal Democratic Party.

During his first campaign speech, Kishida spoke through a microphone and held up a blue, palm-size notebook in Fukushima on Oct. 19.

“I have been jotting down comments from the public in notebooks like this one for many years,” Kishida, 64, who is also LDP president, said. “I will listen carefully to the voices of the public as I go on carving out the future. This one here is testimony to my pledge to the public.”

The speech was held in a corner of Tsuchiyu Onsen, a hot spring resort area with a population of around 300, in the Fukushima prefectural capital.

The area is in the Tohoku region, which was devastated by the 2011 Great East Japan Earthquake, tsunami and Fukushima nuclear disasters. Tsuchiyu Onsen is now suffering from the effects of the COVID-19 pandemic.

Kishida chose to start his campaign tour here to show his willingness to listen to the voices of the disaster survivors, a senior official with the LDP’s Fukushima prefectural chapter said.

Kishida has kept in mind the setbacks of the previous administration of Yoshihide Suga.

Suga adhered to optimistic scenarios in dealing with the pandemic and failed in a number of “pledges” he made to the public.

As a result, his Cabinet’s approval rating plummeted, and his administration ended in only a year.

Kishida was picked as the LDP’s new “poster boy” on Sept. 29 in the party’s leadership election.

He has emphasized his readiness for dialogue.

In slightly more than two weeks after he was sworn in as prime minister on Oct. 4, Kishida attended seven “face-to-face dialogue” sessions with members of the public, including medical workers, disaster survivors and proprietors of bars and restaurants hit hard by the pandemic.

During these sessions, Kishida customarily uses phrases like, “I will work really hard to make the most of your comments in delivering results,” and “I really wish to bring back liveliness to Japan.”

He has named the Oct. 31 Lower House election a “poll for choosing the future.”

However, images of that future have been blurred by Kishida’s remarks during the election campaign.

From relatively early on, Kishida was seen as a promising star in Kochi-kai, a leading LDP faction representing a liberal school of thought.

During the LDP leadership election in September, Kishida called for a Reiwa Era (2019-present) version of the Income Doubling Plan, a pet policy of former Prime Minister Hayato Ikeda (1899-1965), who founded Kochi-kai.

Kishida put his seal on that slogan as soon as he took office as prime minister.

A senior official with the prime minister’s office pointed out one problem with the plan.

“There remains the question of how specifically we can double incomes,” the official said.

POLICIES NOT LISTED IN LDP PLATFORM

During the LDP presidential election, Kishida said wealth could be redistributed in Japan through such measures as increased taxation on income from financial transactions, creation of a “health crisis management agency,” and a potential foundation of a “children’s agency.”

None of those proposals, however, was included in the LDP’s campaign platform for the Lower House election.

After he was elected LDP president, Kishida said “the voices of the public are not reaching political circles” and that “democracy is in crisis.”

He has, however, taken a negative stance toward reinvestigating or clearing up public suspicions about the scandals over the Moritomo Gakuen and Kake educational institutions during the Shinzo Abe administration.

“Kishida has not been able to come up with anything definite because he is trying to be kind to various camps,” an aide to the prime minister said.

Lurking behind Kishida are the shadows of a trio commonly known as the “3A” for the initials of their family names: Abe, LDP Vice President Taro Aso and LDP Secretary-General Akira Amari.

Maneuvers by the 3A cemented Kishida’s victory in the LDP election.

Senior officials of the Kishida administration are now continually perplexed by frequent “interference,” including words like, “Mr. Abe is not happy with that.”

This occurred when Kishida selected members of his Cabinet as well as candidates to run on the LDP ticket.

The period between the dissolution of the Lower House and the general election is only 17 days, the shortest interval in the postwar era.

Kishida put on the back burner all issues that were expected to face a rough going during consensus-building within the party.

He has refrained from mentioning those issues in public during the election campaign.

“The first thing to do is to get over the election,” said a senior official with the prime minister’s office. “And that will be when the Kishida administration will get into motion.”

It remains to be seen what voices of the public Kishida will listen to, and what ideas he will give shape to, during the national election.

“What counts is what I will be doing as prime minister,” Kishida said during a stump speech in Hiroshima Prefecture, which contains his constituency, on Oct. 20. “I will be facing a test myself in the days to come.”