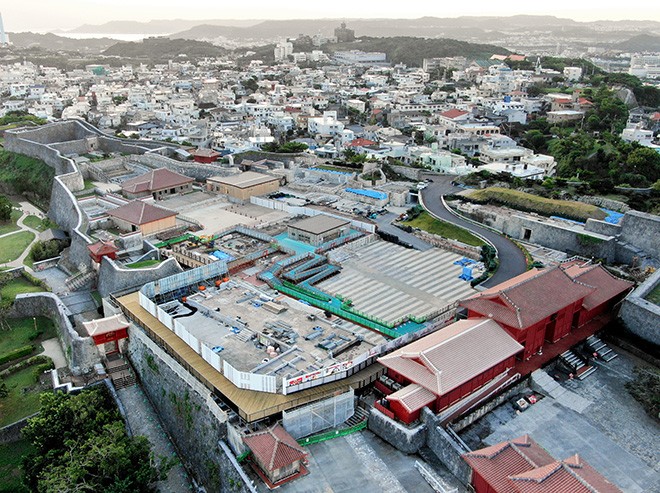 New roof tiles and white plaster coating seen in the right of the front is part of the Hoshinmon gate building at Shuri-jo castle in Naha. A makeshift observatory deck for visitors is under construction nearby for visitors. (Jun Kaneko using a drone)

NAHA--Work to restore the ruins of historic Shuri-jo castle here after a disastrous fire two years ago are gradually beginning to take shape.

New red roof tiles now adorn a building that has received a white plaster coating and serves as the Hoshinmon gate to the square in front of the castle’s gutted main hall. Those renovations were made this past spring.

Oct. 31 will mark the 2nd anniversary of the blaze that destroyed much of site, for centuries a palace for the Ryukyu Kingdom as Okinawa Prefecture was formerly called.

A temporary observatory deck measuring 139 meters long is under construction along a castle wall near the gutted north hall. It will open to the public on Oct. 27.

Work to reconstruct the main Seiden hall is due to start next year with completion set for 2026 when the southernmost prefecture marks the 50th anniversary of its reversion to Japan by the United States.

The fire started in the early morning hours of Oct. 31, destroying the castle’s main hall and five other key buildings spanning an area of about 4,000 square meters.