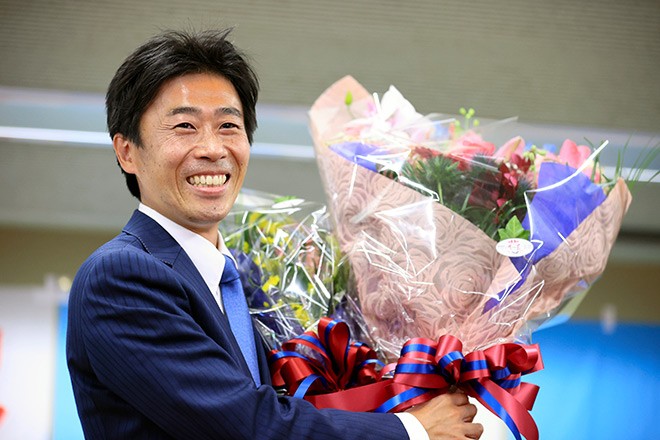 Shinnosuke Yamazaki is all smiles as his victory neared in the Upper House by-election in Shizuoka Prefecture on Oct. 24. (Kazuhiro Nagashima)

The ruling Liberal Democratic Party suffered a setback on Oct. 24 when its candidate lost in the Upper House by-election in Shizuoka Prefecture, despite earlier reports that put him comfortably in the lead.

Yohei Wakabayashi, who was supported by the LDP and Komeito, a junior partner in the ruling coalition, received 602,780 votes.

The opposition parties plan to use the upset in Shizuoka Prefecture to gain momentum for the Lower House election scheduled for Oct. 31.

“There were many voters who believed that casting their ballots in an election would not make a difference in any way,” a senior CDP official said. “But it was significant that we were able to show that people can turn around the situation just one week before (the Lower House election).”

Prime Minister Fumio Kishida described the by-election defeat as “regrettable” on Oct. 25 and said he will take the results seriously.

He also tried to signal a difference between the Lower House election and the Upper House by-election.

“The Lower House election is supposed to be the election to choose which political party is most fit to govern,” he said. “We will pull ourselves together for the upcoming election.”

The LDP won in a landslide in another Upper House by-election in Yamaguchi Prefecture on Oct. 24.

Tsuneo Kitamura, who was endorsed by the ruling coalition, chalked up 307,894 votes, far ahead of runner-up Kiyo Kawai, who was backed by the Japanese Communist Party and gained 92,532 ballots.

Winning in Yamaguchi Prefecture was taken for granted by the LDP. The prefecture is an LDP stronghold, and former Prime Minister Shinzo Abe represents a constituency there in the Lower House.

The party was initially optimistic about its chances in Shizuoka Prefecture, although the opposition bloc has had a solid support base there.

The seat contested in the by-election was previously held by an LDP politician.

In addition, a survey taken by the LDP in early October found that Wakabayashi was outdistancing Yamazaki, due in part to the Japanese Communist Party fielding a candidate in the race, thereby dispersing support for the opposition.

In the middle of the campaign, however, news outlets reported that the two main contenders were fighting head to head.

Yamazaki’s campaign also received the full support from Shizuoka Governor Heita Kawakatsu, who defeated an LDP candidate by a large margin in the gubernatorial election in June.

An Asahi Shimbun exit poll found that 69 percent of unaffiliated voters cast their ballots for Yamazaki, in addition to around 90 percent of voters who support the CDP or DPP.

In the Lower House election, the CDP will fight on a shared agenda with the JCP, the Social Democratic Party and Reiwa Shinsengumi through a policy agreement with the Civil Alliance for Peace and Constitutionalism, an advocacy group. However, the DPP did not join the grouping due to its distance from the JCP.