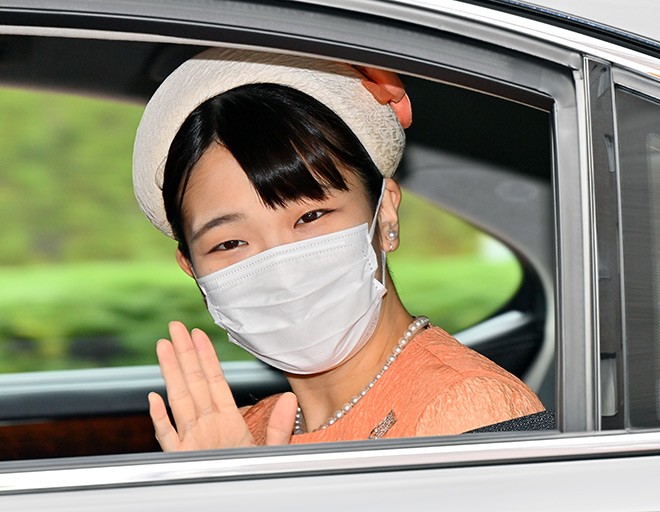 Princess Mako waves to well-wishers as her car enters the premises of the temporary residence of Emperor Emeritus Akihito and Emperor Emerita Michiko in Tokyo’s Minato Ward on Oct. 25. (Hiroyuki Yamamoto)

In her last meeting with her grandparents as a member of the imperial family, Princess Mako visited Emperor Emeritus Akihito and Empress Emerita Michiko on Oct. 25 to inform them of her impending marriage.

Mako is scheduled to marry Kei Komuro, a commoner, on Oct. 26.

A close aide to the emperor emeritus and empress emerita described their meeting as a heartfelt one, according to the Imperial Household Agency.

“The couple has always treasured Mako, and I am sure that they shared a heartfelt time,” the aide was quoted as saying. “They must be saddened by parting with her.”

On the morning of Oct. 25, as well-wishers waited on the street to get a glimpse of Mako, a car carrying the princess arrived at her grandparents' Sento temporary imperial residence. Mako waved to the bystanders as her car entered the premises of the residence.

The princess spent more than an hour meeting her grandparents for the first time since they moved out of the Imperial Palace in March last year and into the temporary residence, according to the agency.

Mako is the first grandchild for Akihito and Michiko. She is the eldest child of Crown Prince Fumihito, younger brother of Emperor Naruhito, and Crown Princess Kiko.

Mako, 30, and Komuro, 30, are scheduled to give a joint news conference on Oct. 26 after agency employees register their marriage earlier that day. Upon marriage, Mako must renounce her royalty status, based on the Imperial House Law.