Lisa’s Wanderings Around Japan/ Kanmon Straits: Take a stroll through history under the sea and enjoy fugu 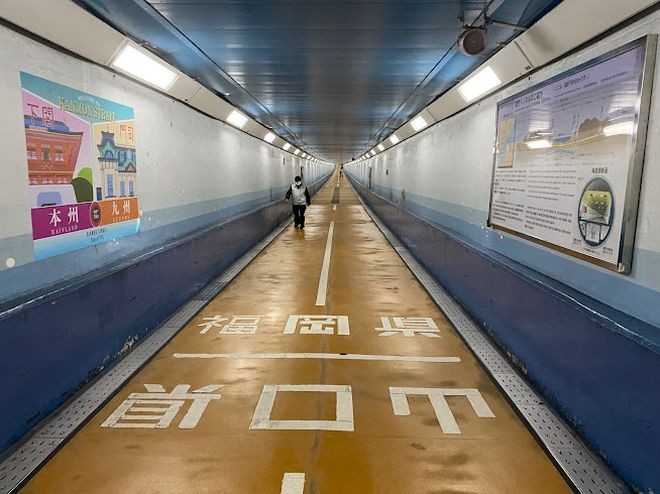 A sign marking the border between Fukuoka and Yamaguchi prefectures is located at a midpoint of the pedestrian Kanmon Tunnel.  (Photo by Lisa Vogt)

Are you ready for a word association game? Here it is: What’s the name of the place associated with fugu (puffer fish) and bananas? Tick-tock, tick-tock, tick-tock. OK, your answer, please. Where? Are you stumped? The correct answer is ... (drumroll here): the Kanmon Straits.

I have to admit, the “ku” version makes for a better story. It doesn’t take a branding expert to see that a place that prides itself for being unparalleled when it comes to puffer fish would prefer the sound of “fortune.”

Today, supermarkets around Japan carry bananas from the Philippines, Ecuador, Mexico and other tropical regions around the world. After the First Sino-Japanese War (1894-95), Japan started importing bananas from Taiwan.

They were sent still green and were ripened in warehouses at Moji Port, where they arrived. Sometimes, however, on the journey to Japan, the fruit would get damaged, bruised or overripen. They say this is where the selling of bananas at bargain prices by street hawkers, “motteke dorobou banana-no-tatakiuri,” originated.

The Kanmon Straits was the site of three historically significant battles. First, the Genpei War in 1185 when Genji and Heike battled it out at Dannoura in Shimonoseki. Genji came out victorious, which led to the establishment of the Kamakura Shogunate.

Fast-forward to the 17th century, Sasaki Kojiro and Miyamoto Musashi had their famous sword duel in 1612 at Ganryujima, which sealed Musashi as the legendary samurai swordsman of all time.

Then, in the 19th century, the Choshu clan attacked Western ships here. This led to the Shimonoseki Bombardment in 1864, which ultimately led to the overthrowing of the Tokugawa Shogunate and ushered in the Meiji Era (1868-1912).

The sea can be crossed by a toll expressway bridge, tunnel, Shinkansen, local train, ferry and, I was intrigued to learn, on foot. I walked the 780-meter free pedestrian tunnel under the sea, entering from the Shimonoseki side. Less than 10 minutes later, I was standing with one foot on Honshu and the other Kyushu.

What an exciting place of historical and literal crossings. Today, instead of separation and battles, we are linked via bridge and tunnel.

This article by Lisa Vogt, a Washington-born and Tokyo-based photographer, originally appeared in the Oct. 17 issue of Asahi Weekly. It is part of the series "Lisa’s Wanderings Around Japan," which depicts various places across the country through the perspective of the author, a professor at Meiji University.