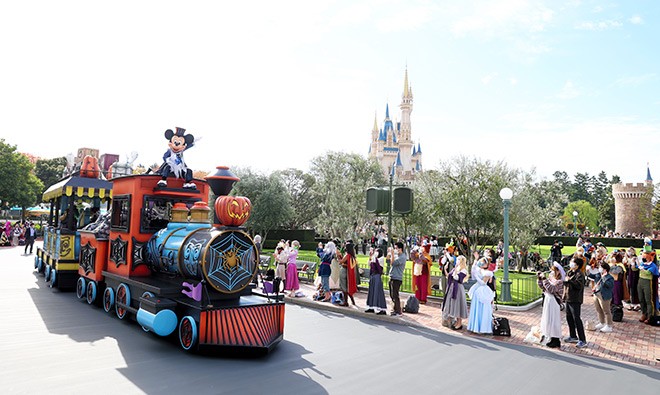 Costumed visitors take in Mickey’s Greeting Parade with Villains as part of the special Halloween event at Disneyland in Urayasu, Chiba Prefecture, on Oct. 25. (Shiro Nishihata)

URAYASU, Chiba Prefecture--Tokyo Disneyland's annual Halloween costume event was back in full force on Oct. 25 with visitors spotted at the theme park disguised as Disney characters including Donald Duck and Snow White.

The theme park opened the event on the day for the first time in two years. Last year, it was canceled due to the COVID-19 pandemic.

Special tickets through Oct. 29 for the Halloween event are sold out already.

Reika Mimori, 19, a company employee from Tokyo, who came dressed as Cinderella, was among the costumed visitors to the park who entered the park before 10 a.m., which had been decked out with special decorations to enhance the Halloween mood.

“I planned to wear this costume last year,” she said. “I can become a different person in my costume, so I want to enjoy myself as much as possible today.”

Visitors require special tickets to attend the event, which permit them to enter the theme park earlier than the normal 10 a.m. admission time and come dressed in costumes of their favorite Disney characters.

They are also allowed to view a special parade and take in other attractions before the park opens for regular visitors.

A new ticketing system was adopted this year, and the event was restarted with a limit placed on the number of visitors.

Chiba Prefecture, where the park is located, on Oct. 25 ended its COVID-19 prevention requests for restaurants, bars and commercial facilities to cut their business hours.

Tokyo Disneyland and DisneySea plan to relax the admission restrictions step by step to admit more guests than 10,000 each per day.

At Disneyland, the night parade Tokyo Disneyland Electrical Parade Dreamlights will restart for the first time in a year and eight months.