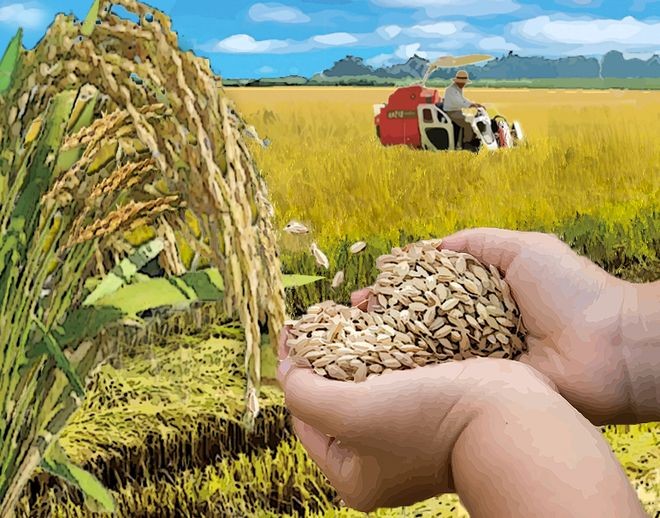 Groping my way through darkness
I find myself trapped
in a spider’s web
--Zamantha Collin Segismar (Misamis Oriental, Philippines)

The haikuist had hoped to eat to his heart’s content, but autumn rains ruined his crops and swelled the strawman. Sara P. Dias sewed a pair of buttons onto a scarecrow’s face in Cape Town, South Africa. Ram Chandran noticed a stocky-looking farmworker in Madurai, India.

In Thames Ditton, England, Keith Evetts realizes that bird-scarers are ineffective, yet he rhetorically questioned on one line: scarecrow will you save the blackness.

Sanae Kagaya has heard that the streets of Ginza are paved with gold, but he was surprised to learn some buildings are topped with golden sheaves of rice.

scarecrow
on a golden rice-field
shopping in Tokyo

arm’s length--
he leads by the example
of a scarecrow

peeing in the field
the scarecrow sees
the corncobs moving

Driving along a country road in San Gemini, Italy, Daniela Misso said she “bumped into a very weird scarecrow.”

Rosemarie Schuldes lost her way in a cornfield in Mattsee, Austria, and didn’t add a third line to her haiku. Angela Giordano got lost in a man’s eyes in Avigliano, Italy.

maize maze
I lost my thread

rice harvest...
specks of gold in the farmer’s eyes

Wieslaw Karlinski became a gentleman farmer in Namyslow, Poland. Mirela Brailean’s interlocutor swirled back and forth in Iasi, Romania.

rippling wheat--
the way she chooses to tell me
about pregnancy

Hifsa Ashraf watched aerial acrobats in Rawalpindi, Pakistan. Teiichi Suzuki pitied the poor farmers who couldn’t harvest their crops before heavy rains. In his haiku, sparrows are a metaphor for farmers. Sparrows are crop pests in Melbourne, Australia, where Nani Mariani penned her poem. Kanematsu welcomed an endangered species to gather up leftover grain from a pesticide-free cropped rice paddy crawling with green frogs, spiders, grasshoppers and mantises.

harvest day
cut through the wheat stalks
a flock of sparrows

birds...
from out of nowhere
harvest season

Evetts claimed that he was “confident there were no such things as ghosts,” but admitted that he “had a moment of shock alone on a hot county road at nightfall.” Karen Harvey’s haiku evokes the 16th-century witch craze. Vandana Parashar mulled a tall tale about beetles creeping around Panchkula, India.

summer thunder
by the road at twilight
rain wraiths

stubble burns
all around the scarecrow
playing with matches

A haikuist from Alabama, Laughing waters conjures up a glowing ruby ring. It would perfectly match the ruby slippers worn by the Wicked Witch of the East in the 1939 film “The Wizard of Oz.”

midnight breeze
ruby on her finger gets bigger

Perhaps getting ready for Halloween this weekend, Kanematsu referred to the dance of the dead. Kagaya spotted a bewitching Japanese flower growing on a streambank. She is a Butoh performer, whose ghost-like white make-up in the “dance of the dead” symbolizes reanimation.

Mona Bedi perceived a faint refraction of light through a pending rainfall in Delhi, India. Mario Massimo Zontini sketched a pastoral view of Parma, Italy. Roberta Beach Jacobson tried her hand at ekphrasis, the art of writing poetry about famous paintings. Henryk Czempiel cut a flower to put behind his ear in Strzelce Opolskie, Poland.

moonbow...
returning from the fields
the women sing

in the fields
farmers and egrets
reap ripe rice

a weed
among the ears of wheat
vivid red poppy

Note how Marilyn Humbert varied the rhythm for two haiku moments in Sydney, Australia: a leisurely rise and fall of voices amid growing golden waves of grain, and a pithy exhilarating push after it was cut.

the rush
wheat grains
into the silo

panicles
wave in the wind
beckon the baker

Yutaka Kitajima imagined the methodical life of a farmer from the distant past in Joetsu, Niigata Prefecture. Murasaki Sagano observed a farmer in a field praying to a stone statue; a jizo is the guardian deity of children. Robin Rich created the rhythmic sound of a grain thresher. Pitt Buerken gazed serenely all night long in Munster, Germany.

Rice reaper
offering some lunch
to a jizo

Ken Sawitri’s family enjoyed an evening meal at a one-star rated outdoor place in Blora, Indonesia. In London, Brandon Broll questioned a metaphor that was coined in a monologue penned in 1855 by Robert Browning in the poem “Andrea del Sarto.”

You say less is more
Shall I venerate you too
With a grain of rice?

Alan Peat composed two haiku and reported from Biddulph, England, that “the weather has been pretty grim … but when the sun is out and the wind gets up the wheat fields certainly are a fine sight.”

rippling wheat--
over the golden sea
a fly

waves of wheat--
on the seabed
harvest mice

Driving along a greenway in Raleigh, North Carolina, Charlie Smith remarked how Japanese arrowroot vines had taken over. Vasile Moldovan paid tribute to ancestry in Bucharest, Romania. Having watched the Summer Games from Peshawar, Pakistan, Azim Khan saluted the Olympians.

Vukovic was attracted to golden waves. Kaur reminded readers that the “wheat harvest is also a time for the lovers to indulge in each other.”

rippling wheat--
I run my hand
through your hair

wheat stalks
basking in the glow
of her complexion

Czempiel said he has enjoyed every day this autumn simply watching this scene unfold in a field near his home: rippling wheat the land glides beneath the cloud cover.

Haiku usually refer to the moment in which they are composed. Mike Montreuil wrote to say that he tried “a small experiment.” He’s anchored his haiku moment in the season of red leaves and forecasted that in two months plenty of snow will fall in Ottawa, Ontario. Kanematsu’s haiku moment deftly included a current season word by mentioning its harvest one year ago.

Grandson’s gift
acorns on my desk
since last fall

The next issues of the Asahi Haikuist Network appear Nov. 5 and 19. Readers are invited to send haiku about an island vacation or winter seclusion on a postcard to David McMurray at the International University of Kagoshima, Sakanoue 8-34-1, Kagoshima, 891-0197, Japan, or by e-mail to mcmurray@fka.att.ne.jp.