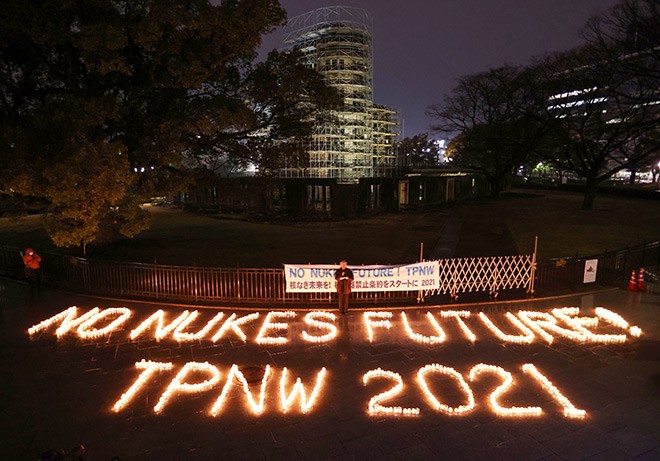 The Treaty on the Prohibition of Nuclear Weapons is celebrated with candles in front of the Atomic Bomb Dome in Hiroshima on Jan. 22, the day when the treaty took effect. (Asahi Shimbun file photo)

How should Japan get involved in the nuclear ban treaty, which is aimed at building a “world without nuclear weapons,” and bring about changes in the stances of nuclear powers?

Prime Minister Fumio Kishida, a lawmaker of the ruling Liberal Democratic Party elected from Hiroshima, has yet to give a clear answer to this crucial question during the campaign for the Oct. 31 Lower House election.

The choices Japanese voters will make at the polls will go a long way toward determining how the only country that has suffered a wartime nuclear attack will contribute to the cause in the coming years.

The Treaty on the Prohibition of Nuclear Weapons, which is designed to outlaw all kinds of nuclear arms, came into force in January. A total of 56 countries and regions have ratified the treaty. Austria will host the first meeting of states parties to the treaty in March.

Even if Japan cannot join the treaty immediately due to its security policy, it can still participate in the conference as an observer to attend sessions and make remarks.

Norway, where the opposition party took power by winning a general election in autumn, has become the first North Atlantic Treaty Organization (NATO) member to express its intention to participate in the conference.

But the Japanese government remains unwilling to get involved in any activity related to the nuclear ban treaty.

Tokyo has stuck to the position that the nuclear deterrent provided by the United States is vital for the nation’s security because of the threat posed by North Korea’s nuclear program and other reasons.

In September, a group of hibakusha, survivors of the 1945 atomic bombings of Hiroshima and Nagasaki, and members of nongovernment organizations called on the Foreign Ministry to join the treaty.

The ministry’s reply was a familiar refrain: The government will “cautiously monitor (the situation) and consider (its actions).”

Attending a treaty conference will offer a precious opportunity to become familiarized with arguments being made among the signatories and contribute to ensuring the effectiveness of new rules to be established.

Japan has a duty to tell the world about the realities of hibakusha and its experiences in supporting them.

In the U.N. General Assembly last year, a record number of countries abstained from the vote on a resolution for abolishing nuclear weapons submitted by Japan.

The unpopularity is believed to stem from the fact that the resolution did not refer to the nuclear ban treaty. The similar resolution Tokyo submitted this year also makes no reference to the agreement.

If Japan keeps refusing to change its stance, the rift between the Japanese government and international public opinion, which is moving toward the abolition of nuclear arms, will only grow.

Kishida has publicly declared that nuclear arms reduction is his “lifetime goal.” While serving as foreign minister, Kishida considered attending a meeting negotiating the nuclear ban treaty but abandoned the idea in the face of opposition within the government.

Even after becoming prime minister, Kishida has yet to announce plans for Japan’s participation in the conference as an observer.

While acknowledging the importance of the treaty as a landmark in the movement toward a nuclear-free world, Kishida remains unwilling to lead Japan into an active role, saying the involvement of nuclear powers is crucial for progress.

It is hardly surprising that his attitude has disappointed expectations of people in the atomic-bombed cities.

Komeito, the LDP’s junior coalition partner, promises Japan’s participation as an observer in its campaign platform and pledges to work to create an environment that will allow Tokyo to ratify the treaty in the future.

As the coalition partner, Komeito should persuade the LDP to start forward-looking debate on the issue.

Their joint campaign platform promises “efforts toward Japan’s participation as an observer with an eye to ratifying the treaty in the future.”

The Democratic Party for the People, another opposition party, has adopted a similar policy on the issue. The issue will test their ability to make steady progress on a tough policy challenge.

November will mark the 50th anniversary of the passing of the Diet resolution on Japan’s three nonnuclear principles--not to make or possess nuclear weapons and not to allow their entry into the nation.

Japan is at a crossroads of whether it will move in tandem with the international community into a new era being opened up by the nuclear ban treaty.

Both the ruling and opposition parties should not forget Japan’s important mission and challenges.