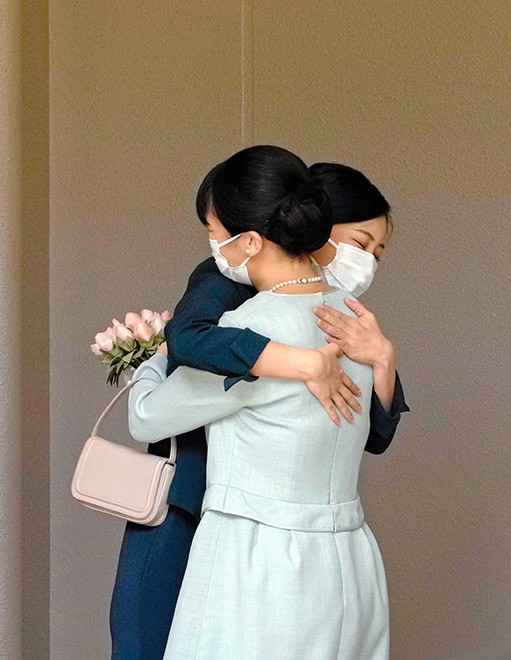 Princess Mako, in blue, hugs her younger sister, Princess Kako, on Oct. 26 before leaving the residence within the Akasaka Estate. (Pool)

After a three-year wait and without a traditional imperial wedding ceremony, Princess Mako officially left the imperial family on Oct. 26 as her marriage certificate with Kei Komuro was accepted by a local government office.

An official working under Crown Prince Fumihito, Mako’s father, submitted the certificate on behalf of the couple.

At about 10 a.m. on Oct. 26, Mako said farewell to Fumihito and her mother, Crown Princess Kiko. She also hugged her younger sister, Princess Kako, before leaving the residence at the Akasaka Estate that had been her home for 30 years.

Under her new name of Mako Komuro, she and her newlywed husband will give a few opening remarks at a news conference at a Tokyo hotel in the afternoon on the same day. They will then distribute written responses to questions they received beforehand to reporters.

Imperial Household Agency sources said Mako was shocked at some of the questions that she considered based on falsehoods and at one time there was talk of not holding a news conference.

But in the end, the two decided they wanted to express their feelings about the marriage that had been postponed for more than three years due in large part to weekly magazine reports about financial problems between Komuro’s mother and her ex-fiance.

The couple will move into a Tokyo condominium and wait for Mako’s passport to be approved before they fly to New York, where Komuro is scheduled to practice law once he passes the bar exam.

Those who have long known Mako and Komuro expressed their happiness that the couple could finally marry.

Norihiko Suzuki was president of International Christian University when Mako and Komuro were students there.

“I believe it was a long and difficult road, but I am happy that they were able to fulfill their feelings for each other,” Suzuki said.

Suzuki, 76, recalled Mako as being a very active student who did not become wrapped up in formalities.

Suzuki also wrote a letter of recommendation for Komuro when he applied to study in the United States because he felt he was a diligent student.

Mako visited various parts of Japan while carrying out her duties as an imperial family member. In October 2016, she visited Arita, Saga Prefecture, to take part in a ceremony related to Arita porcelain ware.

Yukio Suzuta, head of the Kyushu Ceramic Museum, escorted Mako at the time and recalled that she had a deep understanding of Arita porcelain, explaining that she saw examples at a royal palace in Britain when she studied there.

“I got the impression that she was well-versed in Arita porcelain and held a deep love for Japanese artworks,” Suzuta said.

He noted that there are many examples of Ko-Imari antique porcelain in New York where the couple will reside and expressed the hope that she could see some of the works while there.

(Tatsuro Sugiura contributed to this article.)