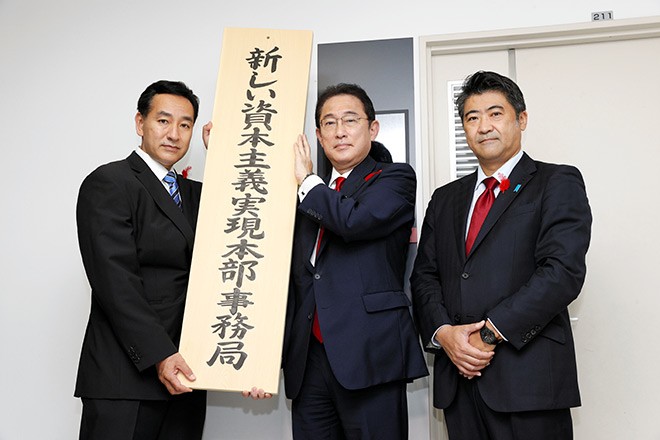 Prime Minister Fumio Kishida, center, holds a sign for a secretariat of his panel to create a "new capitalism" on Oct. 15. (Pool)

Prime Minister Fumio Kishida’s goal to reshape Japan and redistribute wealth to workers was front and center on Oct. 26 as the panel he set up to discuss creating "a new capitalism" met for the first time at the prime minister’s office.

The panel, headed by Kishida, consists of all the members of the Cabinet and 15 experts, including Ken Shibusawa, a consulting company president and great-great-grandson of Eiichi Shibusawa, a Japanese industrialist known as the “father of Japanese capitalism."

Kishida said the panel members “acknowledged the importance of achieving a beneficial circle of growth and redistribution, the need for both the public and private sectors to play a role to realize such goals, and the need to draw on all policies.”

He instructed the attendees to draft an urgent proposal as soon as early November on the highest priority issues the administration needs to tackle, such as strengthening investment in people.

Kishida set up the panel as an afterthought to former Prime Minister Shinzo Abe’s “Abenomics,” under which cash reserves of companies increased but real wages for workers failed to rise significantly.

Through the discussion, Kishida hopes to clarify the roles that the government and businesses can play in the redistribution of wealth.

Kishida aims to rebuild a strong middle class by conceiving policies that circulate the fruits of corporate profits to workers.

The panel is also expected to plot out a vision that will be a foundation of the administration’s economic policies.

Kishida said he will create more panels to discuss other pet projects of his, such as “creating a nation of digital garden cities” and “building a new social security for all generations.”

These panels will work together with the “new capitalism” panel, he said.