Mako says marrying Kei an option to protect ‘our hearts’ 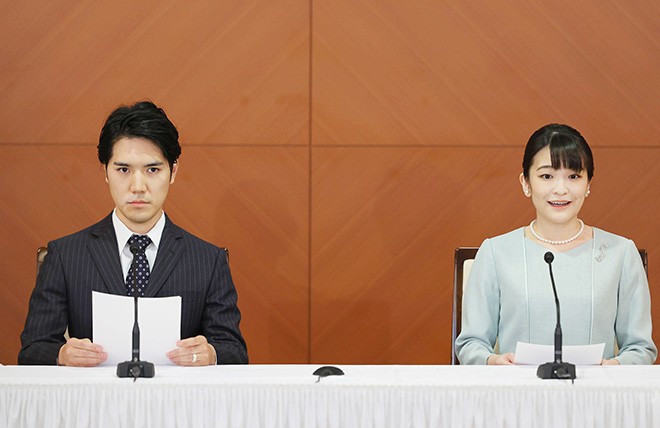 Newlyweds Kei and Mako Komuro meet with reporters on Oct. 26 after their marriage certificate was accepted by a local government office. (Pool)

Although they had not seen each other for three years until recently, newlyweds Kei and Mako Komuro expressed their heartfelt feelings and the love for each other that led to their marriage at a brief news conference in Tokyo on Oct. 26.

The couple also touched upon the financial problems between Kei Komuro’s mother and her ex-fiance that were considered the main reason the nuptials were postponed for about three years.

Mako, who left the imperial family upon marriage, spoke first and said, “I recognize that there are various views held regarding my marriage to Kei. He is an irreplaceable presence to me. Marriage was an option that we had to take in order to go on living while protecting with care our hearts.”

Kei’s first words were, “I love Mako. I feel that I want to lead a one-time only life with the person who I love. We have shared various feelings and encouraged each other in times of happiness and when it was not in the past.”

Mako also explained that she asked Kei to both deal with the various problems associated with his mother and to also go to study in the United States ahead of his initial plans.

She said that because she did not have many opportunities to speak in public, many misunderstandings arose.

“Mistaken information for some reason was used in a manner that made it appear to be correct, and I was afraid and also felt sad because of the spreading of unfounded stories,” Mako said.

Saying his mother had also suffered psychological problems, Kei explained that he tried his best to act on her behalf in resolving the trouble.

“I was saddened when Mako also began suffering psychological problems due to the libelous remarks,” Kei said. “My mother also went on living while holding fears for her life.”

Mako concluded her remarks by touching upon the many people who also suffer psychological problems. She expressed the hope that a society could be created in which more people could go on living while taking care of their mental health through the warm help and support of those around them.

The couple left the conference room after their written responses to questions submitted beforehand by the Imperial Household Agency press club and the Japan Magazine Publishers Association were distributed to the reporters in attendance.

One of the questions asked Mako how she felt about becoming a private individual after leaving the imperial family. She said she would need more time to gain a fuller realization of what that constituted.

But she did raise concerns that libelous remarks would continue in the future and hurt both her parents, Crown Prince Fumihito and Crown Princess Kiko, as well as Kei’s mother.

She also refrained from talking about her future plans because they are a private matter.

When asked about the negative response on the internet regarding the reports about Kei’s mother, Mako explained the diagnosis of complex post-traumatic stress disorder she had received and admitted that she was not in the best of physical health but had been supported by Kei and others.

In response to one of the two questions submitted by the Japan Magazine Publishers Association, Mako said the question gave the impression that false information was actually a fact and was why she felt she would not be able to keep a stable mind while responding to it at the news conference.

She gave that as the reason that written responses were submitted instead. She also expressed disappointment that such a question was even asked.

Meanwhile, the Yahoo! News website closed the comments section for two news reports about the Komuros because company officials considered a certain number of the postings as violating the company’s comments policy.