VOX POPULI: Union of Mako and Kei Komuro deserves all of Japan’s blessing 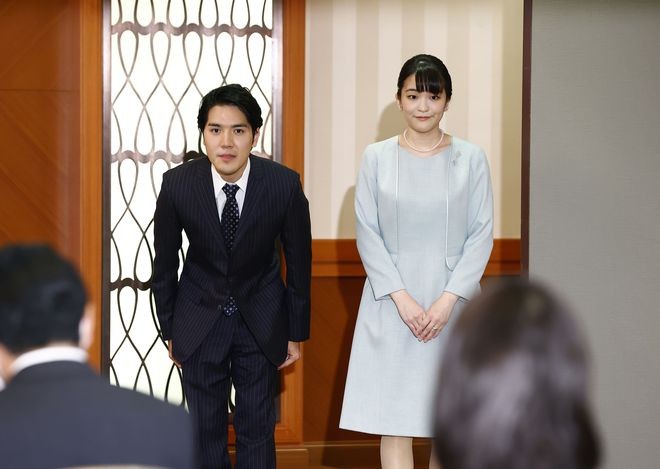 Newlyweds Kei and Mako Komuro leave the room where they held a news conference at a Tokyo hotel on Oct. 26. (Pool)

As of the afternoon of Oct. 26, Princess Mako's appellation changed from "Mako-sama" to "(Komuro) Mako-san."

This sounded strange to me, since the woman being addressed by the new honorific was still the same woman.

From what I could surmise from her comments during her Oct. 26 news conference, which was also attended by her new husband, Kei Komuro, she must have undergone tremendous difficulties until she finally shed the lofty "sama" and earned the plebeian "san" upon her marriage to a commoner.

Regarding Komuro's studying abroad in the United States, Mako noted that she had personally asked him to "establish a base overseas."

She must have decided that for the two of them to be able to live together, he must first study abroad and then secure a job locally.

I believe this was also her declaration that they could no longer remain in Japan and be forced to live in full view of the public.

During their courtship, some people were openly skeptical of their marriage being able to "earn the blessing of the Japanese people."

But that's an unwarranted observation. If you read the Constitution as is, it provides, “Marriage shall be based only on the mutual consent of both sexes."

If both parties share the same desire to live with each other as the person they love, that alone should be more than good enough a reason.

This case invariably directed my attention to the absence of freedom inherent in the lives of members of the imperial family. They have no freedom to choose their profession or faith, nor are they allowed to decide where they want to live.

The marriage of a male member of the royal family must be sanctioned by the Imperial Household Council, meaning his freedom is clearly restricted.

I am sure many people respect the imperial family and wish for it to last long. But asked if they want to be born into circumstances where their rights and freedoms would be severely limited, I wonder how they would answer.

I think we have to start asking ourselves that question.

Mako stated that in the days to come, she anticipates facing problems that will be different from those of the past, but she and her husband will deal with them together and move on.

Obviously, no marriage is ever without challenges. But unlike in the past, the couple will be able to cope with them on their own.