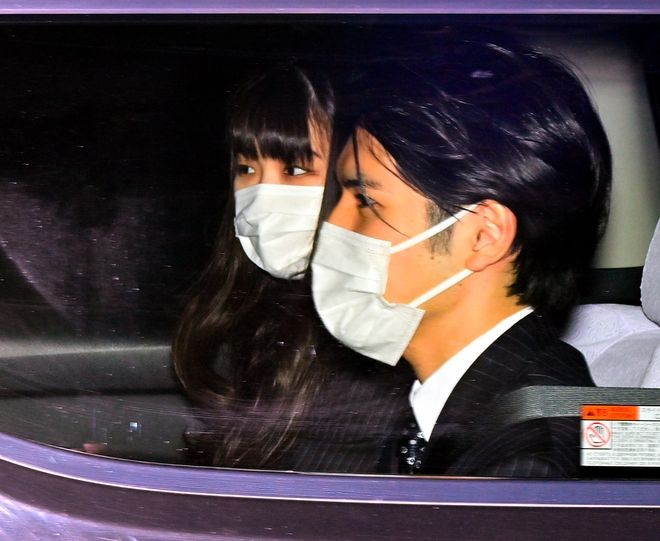 Newlyweds Kei and Mako Komuro leave a hotel in Tokyo where their news conference was held on Oct. 26. (Hiroyuki Yamamoto)

We wish the couple all the best and hope they will together make a happy, loving family.

Their courtship was quite unusual, to say the least. After the announcement of their unofficial engagement in 2017, reports surfaced of an alleged financial dispute in which Komuro's mother was involved, and the traditional imperial ceremony of betrothal (Nosai-no-Gi) was postponed.

This was followed by the cancellation of all other pertinent imperial rites and public events, and Mako declined the lump-sum payment to which she is entitled to as a princess leaving the imperial family.

Had the payment been made against her will, the couple would have been exposed to even harsher criticism from the public.

That said, however, the payment is prescribed by the Imperial House Economy Law.

To avert future problems, the government and the Diet must examine and deal appropriately with the issues involved.

Mako, who attended a news conference on Oct. 26 together with Komuro, noted to the effect that she was terrified by how inaccurate information was treated as fact and passed along extensively.

Indeed, some of the media hype and online frenzy over their marriage was shamelessly sensationalist.

Under the Japanese Constitution, which defines the emperor as the symbol of the state and of the unity of the people, the emperor and members of the imperial family are subject to many restrictions.

They have no freedom to choose their profession or domicile, nor are they in a position to rebut criticism and slander.

Born into a setup that requires a certain family to be responsible for maintaining the nation's vital system, Mako was no stranger to experiencing difficulties and getting hurt in the process.

Every member of the imperial family is a public figure. As such, it is only natural that their words and deeds attract the interest of the public and become subjects of public opinion, which can turn relentlessly critical.

On the other hand, every member has human thoughts and feelings and is bound to acquire a value system of their own. And there is nothing unusual about gaps arising between who they really are and their "ideal" persona in the eyes of the public.

But, in point of fact, different people have different images of their "ideal person."

What do we expect of the emperor and imperial family members as public figures, and how far should we go in demanding their forbearance?

On the other hand, how do we define their rights as individuals and how much leeway are we going to allow them to exercise their personal freedoms?

We must stop and think, and deepen public discourse.

Sovereignty rests with us, the people, and we must not forget that is also we, the people, who decide how the emperor system should function.

With Mako's marriage, the number of imperial family members who support the emperor has been reduced to 16.

This past July, a government panel of experts issued a set of proposals titled "Kongo no Seiri no Hokosei" (literally, "the future direction of identifying and resolving issues"), including allowing female members to retain their imperial status after marriage.

It has been a while since the growing difficulty of maintaining the rules of imperial succession and activities of the imperial household was pointed out, and the government held internal discussions in 2005 and 2012.

However, the discussions were interrupted on both occasions, and the situation has since become even more challenging.

The government must take a good, hard look at its failings of these past years and strive to resolve the pending problems, taking into account the issues raised by Mako's marriage.