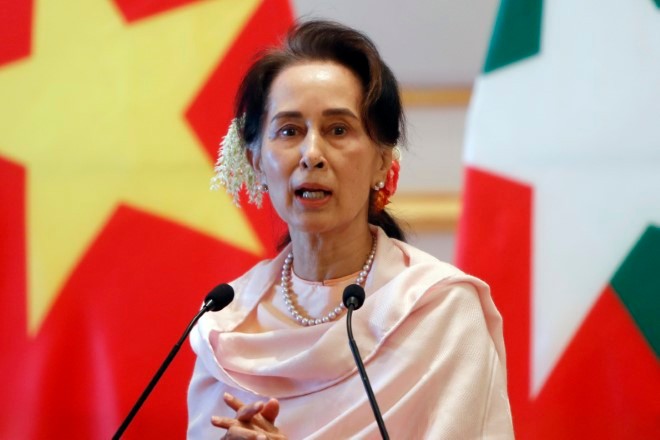 BANGKOK--Ousted Myanmar leader Aung San Suu Kyi testified in court for the first time Tuesday in one of several cases against her, but details of what she said were not available because of a gag order on her lawyers.

Since last week, all defense lawyers in Suu Kyi’s cases have been barred from providing details of the court proceedings. The action was taken under Section 144 of the Code of Criminal Procedure, a broadly worded statute from British colonial times intended to deal with emergency situations that threaten public safety. There have been no signs of unrest related to any of her trials.

The only accounts of the proceedings had previously come from lawyers defending her and her co-defendants. The court sessions are closed to reporters and the public, the prosecutors do not comment on them, and the state-controlled media have not reported directly on them.

Maj. Gen. Zaw Min Tun, the spokesperson for the military government, said earlier this month after the gag order was imposed on Suu Kyi’s main lawyer that it was imposed because he had incited local and foreign media to spread false information that could destabilize the country.

A person familiar with the legal proceedings confirmed that Suu Kyi testified Tuesday at the special court session in the capital, Naypyitaw, but could not provide details. The source asked not to be identified because of fear of legal action or harassment.

The court has been hearing testimony related to the charge of incitement, which is sometimes referred to as sedition. The offense is defined as spreading false or inflammatory information that could disturb public order and is punishable by up to three years’ imprisonment.

Suu Kyi’s co-defendants in the case are Win Myint, who was president in her government, and Naypyitaw’s former mayor, Myo Aung.

Their lawyers have repeatedly tried but failed to have the incitement charge dropped.

The evidence submitted by the prosecution consists of statements posted on a Facebook page of Suu Kyi’s National League for Democracy party. The lawyers for Suu Kyi and Win Myint have said they cannot be held responsible for the statements--which criticized the takeover and suggested in broad terms that it be resisted--because they were already in detention.

Suu Kyi has been detained since Feb. 1, when the army seized power and stopped her and her party from beginning a second five-year term in power after a landslide victory in last November’s general election. The military says it acted because there was large-scale electoral fraud, an allegation that does not appear to be well-supported.

Opposition to the army’s takeover is widespread and takes the form of peaceful civil disobedience as well as armed resistance. Security forces suppressed initial non-violent protests with deadly force, killing about 1,200 civilians according to a detailed list compiled by the Assistance Association for Political Prisoners.

The government says a smaller number of people were killed in actions taken to restore order. The Foreign Ministry said in a recent statement that there were 986 terror attacks, 2,344 bomb attacks and 312 arson attacks from February to late October.

The authorities are trying Suu Kyi on multiple criminal charges that her supporters and rights groups say are contrived in an attempt to discredit her and legitimize the military’s seizure of power.

Suu Kyi is also being tried in the same court on two counts of breaking COVID-19 pandemic restrictions during the 2020 election campaign, illegally importing walkie-talkies and unlicensed use of the radios.

In separate proceedings, she is accused of corruption, which is punishable by up to 15 years in prison, and violating the Official Secrets Act, which carries a maximum term of 14 years.