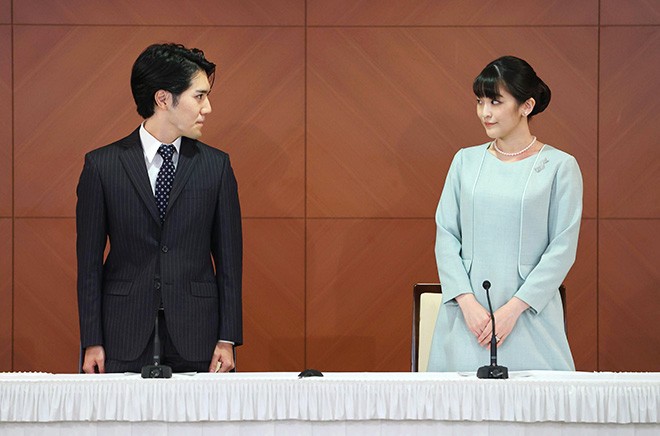 Kei and Mako Komuro prepare to speak with reporters at a news conference at a Tokyo hotel following their marriage on Oct. 26. (Pool)

Crown Prince Fumihito and Crown Princess Kiko described the long-delayed marriage of their eldest daughter, Mako, on Oct. 26 as “an unprecedented one for the imperial family.”

They likely had in mind the postponement of the wedding after reports surfaced once Mako and Kei Komuro announced their engagement in 2017 about “financial problems” involving Komuro’s mother.

Another consideration was that all traditional ceremonies normally associated with the wedding of a female imperial family member were canceled.

Such circumstances did make the marriage a highly unusual one and it also focused attention on troubling issues related to the imperial family.

One issue that again came under the spotlight was the “human rights of imperial family members.”

Article 24 of the Constitution states that, “Marriage shall be based only on the mutual consent of both sexes.”

Ordinarily, a marriage should be possible as long as there is such an agreement among the couple involved.

At the same time, Article 1 of the Constitution states that the emperor derives “his position from the will of the people with whom resides sovereign power.”

Based on that provision, Fumihito had asked that the marriage be one that received the blessing of the general public. That, in turn, led Mako and Komuro to postpone their wedding for more than three years.

If one precondition for the existence of the “emperor as symbol of the state” system is the will of the people, then a certain degree of public interest exists in reporting about the “financial problems” as well as discussing whether Komuro was a suitable marriage partner.

That may explain the arguments made about the news conference held by the newlyweds at a Tokyo hotel following their marriage. Some suggested that the two should present a thorough explanation about the various issues that had been raised until now about them.

But one factor that should not be forgotten is that flesh-and-blood human beings are the ones who carry out the various roles in supporting the imperial family system.

Emperor Emeritus Akihito and Empress Emerita Michiko strived to have the imperial family become a more open one. That intention has been carried on by Emperor Naruhito and Empress Masako.

At the same time, Michiko and Masako both joined the imperial family as private citizens and have suffered various problems, with Michiko being unable to speak and Masako diagnosed with adjustment disorder.

The fact that Mako, who was born into the imperial family, also was diagnosed with complex post-traumatic stress disorder shows that imperial family members whose every move is under close public scrutiny are under great stress.

We must also think about Mako’s use of the strong term “libelous remarks” during the news conference.

All Mako likely wanted to do was marry the man she loved, but she was hurt by the criticism, including speculation, that repeatedly put her desire in question.

If the human rights and dignity of individual imperial family members are trampled upon, that could affect the sustainability of various aspects that make up the imperial family system.

With the decline in the number of imperial family members, now at 17, the difficulty of continued stability for ascension to the Chrysanthemum Throne has also emerged as a pressing issue. A government panel of experts has proposed that female imperial family members be allowed to remain in the imperial household after they marry a commoner.

Now may be the time to again discuss whether the current circumstances allow imperial family members to carry out their roles without an excessive burden being placed on their physical and mental condition.

(This article was written by Ryuichi Kitano, a senior staff writer, and Tatsuro Sugiura.)