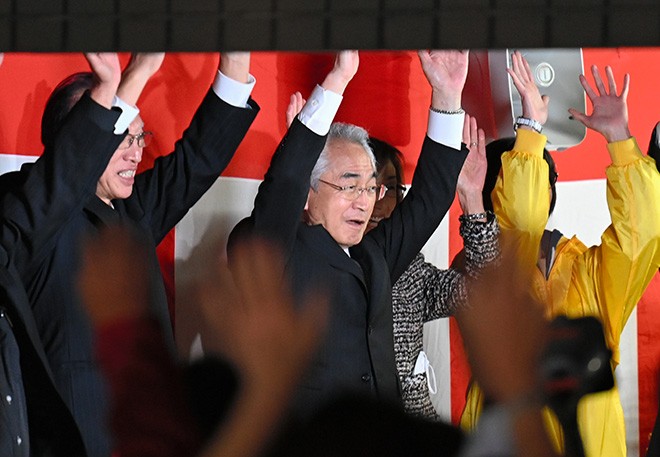 SUTTSU, Hokkaido--Haruo Kataoka was re-elected town mayor here on Oct. 26 on a platform in favor of hosting a final storage facility for nuclear waste to revitalize the local economy.

Kataoka will serve his sixth term as mayor of the town with a population of about 2,800. In the previous four mayoral elections, he ran unopposed.

The central government has long sought a location willing to house a permanent storage facility for waste generated from the country’s nuclear power plants.

The government finally caught a break in August 2020, when Kataoka said he might ask the government to consider Suttsu as a final storage site.

Despite the mixed reaction from residents, the town formally applied to the government in October, and the first stage of the selection process started the following month.

This two-year stage, called the literature research process, mainly involves studying documents and data on the feasibility of the area for storing nuclear waste. The entire selection process, including drilling, taking geological samples and conducting other tests, could take two decades to complete.

A municipality can receive up to 2 billion yen ($17.5 million) in government subsidies during the first stage and 7 billion yen during the second stage that lasts for four years.

Kataoka has argued that the subsidies would help turn around the local economy that has been battered by a dwindling population and the novel coronavirus pandemic.

He has also said the town will hold a referendum in autumn 2022 after the literature research process ends, asking residents if Suttsu should move to the next step in the selection process.