Hibakusha gave his never-give-up spirit to the next generation 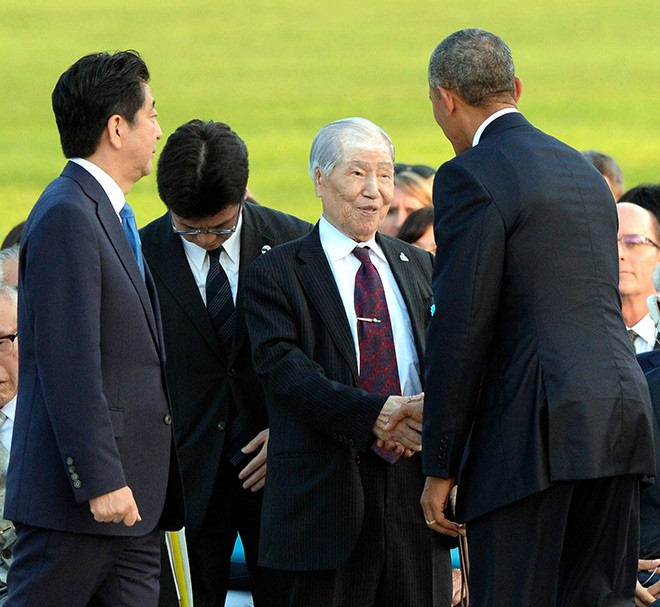 Whenever he gave a talk about his experience surviving the atomic bombing of Hiroshima, Sunao Tsuboi would always conclude his speech with the rallying cry, “Never give up!”

Tsuboi, who never yielded in his anti-nuclear activism, died on Oct. 24 at 96.

He relied on that never-give-up spirit for all his adult life. When the atomic bomb was dropped on Hiroshima on Aug. 6, 1945, he was about 1 kilometer from ground zero and suffered major burns throughout his body.

He did not regain consciousness for about a month, so he did not learn about the emperor’s announcement of Japan’s surrender that ended World War II on Aug. 15, 1945, until long after it happened.

Tsuboi received treatment at hospitals on about a dozen occasions over the years. There were times when his condition was serious.

But Tsuboi survived that bombing thanks to the help of many people. That is when he decided he would tell the world about the suffering that the hibakusha, or survivors of the bombing, endured.

He expressed his relentless determination to the world in 2015 at the U.N. disarmament conference in Hiroshima.

“I will not give up on the abolition of nuclear weapons until my very last breath,” Tsuboi said.

Tsuboi met with then-U.S. President Barack Obama in May 2016, when he became the first sitting U.S. president to visit Hiroshima. Tsuboi reminded Obama of his 2009 Prague speech calling for a world without nuclear weapons and told him the hibakusha would work with him to help realize that dream.

Over the years, Tsuboi inspired younger generations with his words.

Yuta Takahashi, 21, a junior at Tokyo’s Keio University, is part of a group that asked Diet members about their views concerning the Treaty on the Prohibition of Nuclear Weapons (TPNW), which took effect in January.

The group published its findings online.

Takahashi said he became involved in such activities because of Tsuboi.

When Takahashi was still in junior high school, he met with Tsuboi over the course of two days, along with his fellow classmates, and they made a pamphlet containing his testimony.

Takahashi still remembers Tsuboi shedding tears when he spoke about an attempted love suicide when he was much younger because his relatives opposed his marriage to the woman who would eventually become his wife.

Tsuboi initially asked Takahashi and his group not to print that story. But they insisted that they wanted to include it in their report. Tsuboi finally relented.

“I will have to visit my wife’s grave and tell her what I decided,” he said with a smile.

“Those of us who heard the testimony directly from him have the responsibility to maintain that in our hearts and connect it to activities that lead to a world without nuclear weapons,” he said.

Akira Kawasaki, a member of the international steering group for the International Campaign to Abolish Nuclear Weapons (ICAN), which won the Nobel Peace Prize in 2017, said he felt it was symbolic that Tsuboi died the year when the TPNW went into effect. He said the treaty resulted from the efforts of the hibakusha.

In October, Kawasaki showed past testimony from Tsuboi during an online lecture.

“There are many young people around the world who have gained an understanding about the inhumane nature of nuclear weapons after they were shocked from the intense way in which he told about his experience,” Kawasaki said.