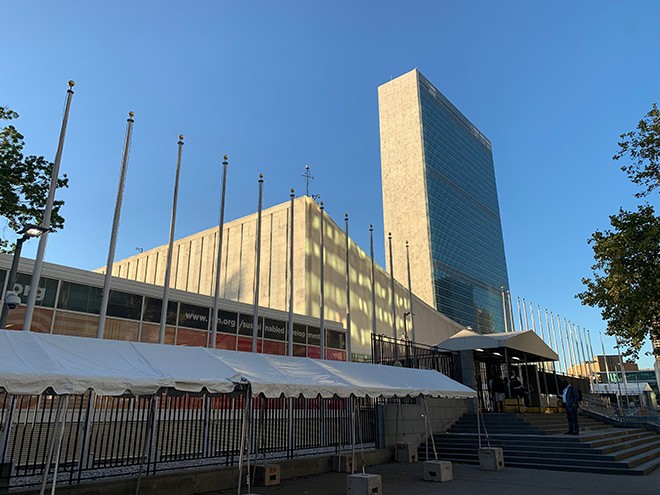 NEW YORK--A United Nations draft resolution sponsored by Japan calling for the abolition of nuclear weapons made no reference to the Treaty on the Prohibition of Nuclear Weapons for the fifth consecutive year since the treaty was adopted in 2017.

Japan, which has yet to sign the treaty, submitted a similar resolution for the 28th straight year. This year’s draft resolution, the first since the treaty took effect in January, was approved on Oct. 27 by the U.N. First Committee, which handles disarmament and international security issues.

Two nuclear powers, Britain and the United States, were among the 57 co-sponsors of the draft resolution, which garnered the support of 152 nations, including France, which is also allowed to possess nuclear weapons under the Non-Proliferation Treaty (NPT).

Thirty nations abstained from voting, while China, Russia, North Korea and Syria voted against the resolution as usual.

But there was no mention of the nuclear weapons prohibition treaty in this year’s resolution, which only noted member nations will bear in mind that “various approaches exist towards the realization of a world without nuclear weapons.”

A senior Japanese Foreign Ministry official told reporters after the voting that the resolution made no reference to the treaty because no nuclear powers are joining it, while also acknowledging that the treaty is key to realizing a nuclear-free world as Prime Minister Fumio Kishida has said.

The official also quoted Kishida’s earlier comments that expressed his willingness to gain the trust of the United States, Japan’s key ally, to together move toward a world without nuclear weapons.

The official stressed that three nuclear-armed nations--the United States, Britain and France--supported the resolution and that more countries voted in favor of it than last year and the year before last.

The official also said the resolution was approved by the largest number of nations with the smallest number of countries voting against it among all comprehensive draft resolutions on nuclear disarmament adopted the same day.

The resolution is expected to be officially adopted at a plenary meeting of the U.N. General Assembly in early December.