Pumice stones generated by the eruption of Fukutoku-Okanoba, an undersea volcano 1,400 kilometers away, cover parts of the fishing port of Hentona, Okinawa Prefecture, on Oct. 25. The floating stones have reached other parts of Okinawa Prefecture as well as Amami-Oshima island in Kagoshima Prefecture, causing losses to fishing and pisciculture activities. The volcano, about 1,300 km south of Tokyo, erupted in August. (Masahiro Hirano) 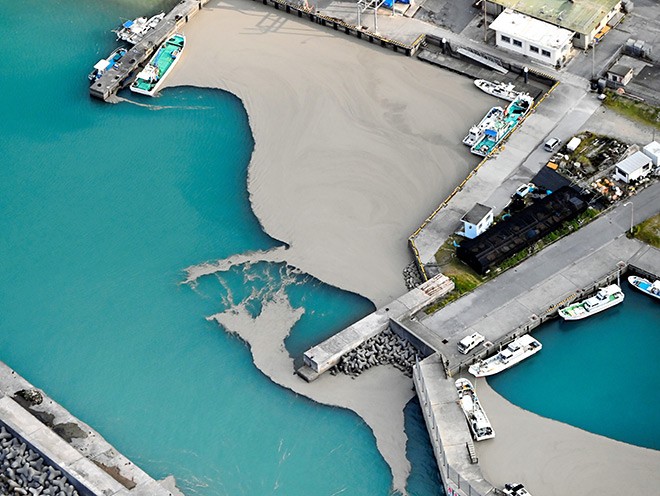 NAHA--Massive amounts of floating pumice stones spewed by an underwater volcano have littered coastlines in Okinawa Prefecture, forcing about 25 percent of fishing boats in the prefecture to remain stuck at ports.

The prefectural government said as of Oct. 25, operators of 756 fishing vessels decided not to go out to sea to avoid engine trouble caused by the floating stones.

Prefectural officials added that large numbers of fish cultured in a pen in Hentona port in the northern part of the prefecture died after swallowing pumice.

An emergency meeting was held on Oct. 27 to gauge how many parts of Japan’s southernmost prefecture were affected by the eruption and how to remove the pumice.

Prefectural officials plan to start preparations for the removal work as early as this week by hiring a contractor.

Fukutoku-Okanoba, the undersea volcano in the Ogasawara island chain, is actually part of Tokyo but lies 1,300 kilometers south of the city.

The eruption began on Aug. 13 and was one of the largest in postwar Japan, according to the Japan Meteorological Agency and the National Institute of Advanced Industrial Science and Technology.

The total amount of pumice ejected in the eruption is estimated at tens of millions of cubic meters.

The stones reached Kita-Daitojima and Minami-Daitojima islands, both located east of Okinawa’s main island, on Oct. 4.

Okinawa’s main island confirmed the arrival of pumice on Oct. 13 and Oct. 14.

The Japan Coast Guard’s 11th Regional Coast Guard Headquarters, which is based in Naha, said an aerial survey showed vast amounts of pumice present in 10 marine locations on the morning of Oct. 26.

The Coast Guard urged fishermen and boat operators to regularly check if the floating stones are clogging their engine cooling apparatus.

The pumice will likely reach Shikoku and other parts of Japan’s main islands via the north-flowing Kuroshio Current, according to the institute.

The institute said the stones will eventually absorb water and sink, becoming homes for shellfish, but it cannot predict when the volume on the surface will decrease.